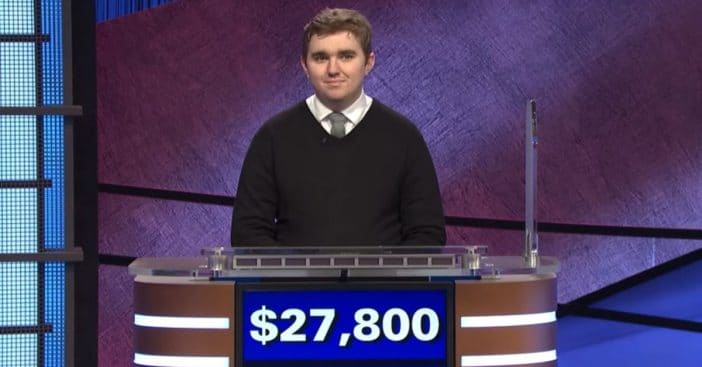 Recently, Brayden Smith died unexpectedly at the age of just 24. Smith gained national fame after becoming a champion of Jeopardy! News of Smith’s passing came via a Twitter post from his mother.

Smith participated in Jeopardy! at an important time in the show’s history, while being an important part of the show himself. He won the trivia contest five times, most of which ended up as some of the last episodes hosted by Alex Trebek before Trebek’s own passing.

The JEOPARDY! family is heartbroken by the tragic loss of Brayden Smith. He was kind, funny and absolutely brilliant. Our deepest condolences go out to Brayden’s family. He will be missed. https://t.co/aFQRt6KzPc

Brayden Smith was a member of the Jeopardy! family

The official Jeopardy! Twitter page shared a heartbreaking Tweet by Debbie Smith last week announcing the death of her son Brayden. “We are heartbroken to share that our dear Brayden Smith recently passed away unexpectedly,” she wrote. “We are so grateful that Brayden was able to live out his dream on @jeopardy.” Indeed, Smith is reported to have died on February 5. His cause of death is currently unknown, but he was only 24.

In turn, the gameshow retweeted the news and added its own caption, “The JEOPARDY! family is heartbroken by the tragic loss of Brayden Smith. He was kind, funny and absolutely brilliant. Our deepest condolences go out to Brayden’s family. He will be missed.”

Brayden Smith’s interests and dreams made him the ideal budding champion of Jeopardy! He enjoyed studying everything from history to economics, philosophy to political science, as well as the arts. All the while, Fox reports, he enthusiastically supported his favorite football team, the Detroit Lions.
Academically, Smith had big dreams and was well on the path to realizing those dreams. He chased a career as a lawyer for the federal government and had the chance to make important changes to America when he interned at Cato Institute in Washington, D.C., where he researched criminal justice reform issues. Fox also reports Smith “was a National Merit Scholar semifinalist, was active in the Junior Classical League and captained his school’s Quiz Bowl team to back-to-back state runner-up finishes.” Smith is survived by his mother Debbie, father Scott, brothers Bryce, Brock and Brody, an aunt, uncle, and several cousins and grandparents. Rest in peace to a young man gone too soon.
Click for next Article
Previous article: The One Reason Henry Winkler Was Cast As Fonzie
Next Post: Meghan Markle And Prince Harry Are Expecting Baby Number Two