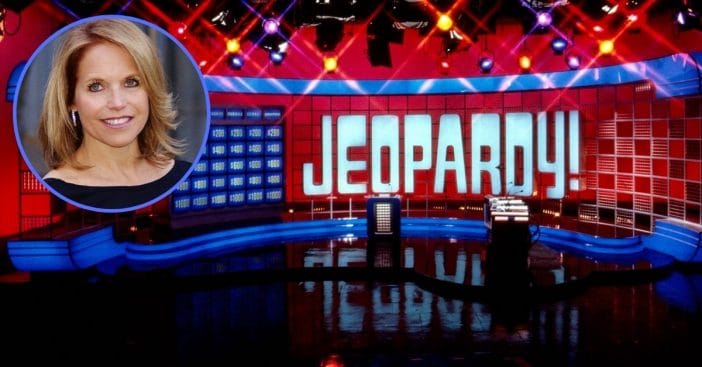 Katie Couric will officially be one of the first hosts for Jeopardy! following the airing of the final episodes with Alex Trebek. The longtime television figure will host the show for a week, according to a report by NY Post.

The show has announced plans to have different rounds of hosts lead the show until they can decide on a permanent replacement. Former Jeopardy! champ Ken Jennings has also been booked for one of the guest-hosting slots on the show.

This news drops as Trebek will appear for the final time on Jeopardy! in a slew of episodes that were filmed just before his death of pancreatic cancer. The longtime beloved host died in November at the age of 80. On Monday night’s episode, Trebek delivered a powerful message on giving.

“You’ll recall that about a month ago, I asked all of you to take a moment to give thanks for all of the blessings that you enjoy in your lives,” he said in the message. “Now, today, a different kind of message. This is the season of giving. I know you want to be generous with your family, your friends, your loved ones.”

A sweet, final message from Trebek

He continues, “But today, I’d like you to go one step further. I’d like you to open up your hands and open up your hearts to those who are still suffering because of COVID-19. People who are suffering through no fault of their own. We’re trying to build a gentler, kinder society, and if we all pitch in — just a little bit — we’re gonna get there.”

The episode, filmed in October, also had a sweet message from the team at the end of the episode dedicated to Trebek. The message read: “Forever in our hearts, always our inspiration.” His final episode will include  “a special tribute to the life and work of the man who captained America’s Favorite Quiz Show with skill, style, and sophistication for 36+ years,” according to a statement from Sony Pictures Television.
Couric anchored NBC’s Today from 1991 through 2006, then moved on to anchor CBS Evening News and also started her own media company. Couric herself is also an advocate for cancer screenings and research as she lost both her first husband and sister to the disease. We’re excited to see what Couric can bring to this new guest role!
Click for next Article
Previous article: Whatever Happened To Christopher Reeve From ‘Superman’?
Next Post: Christie Brinkley Finally Had The Surgery She Has Needed Since 1994