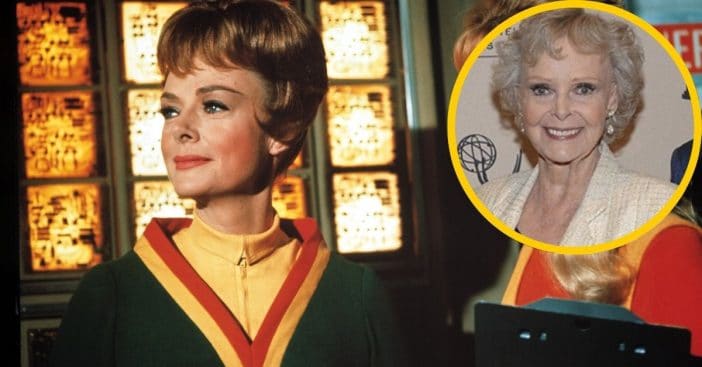 When a seemingly straightforward trip among the stars goes awry, the Robinson family finds itself Lost in Space. Every family member must contend with their own wishes and the powerful will of outer space. Fortunately, the family had Dr. Maureen Robinson at the helm with her husband. As Maureen, June Lockhart played yet another iconic TV mom and hero. But what happened after the show?

Fittingly, June Lockhart came from a celebrated entertainment background. Her parents were Gene and Kathleen Lockhart, stars among Broadway and English stages respectively. June Lockhart herself entered the field fairly early alongside her parents in 1938’s A Christmas Carol; born on June 25, 1925, she was only around 13. Lockhart did not stay a sidenote compared to her parents for long. In 1947’s For Love or Money, she received recognition as a talented actress in her own right. Though this proved her ability to perform well in movies, TV roles followed with the most prominence in the following years.

Two of Lockhart’s most famous TV roles come from playing mothers. First, she played Ruth Martin, Timmy’s mother in Lassie, one of America’s oldest and most beloved coming-of-age shows. Lockhart maintained this role from 1958 to 1964, accumulating some 200 episodes. Lost in Space then saw her as Dr. Maureen Robinson, a steady rock of compassion – and a really great cook. She brought wisdom, grace, and strength to each episode in addition to a strong biochemistry background during the family’s journeys to worlds unknown.

RELATED: Taking A Look At The Cast Of ‘Lost In Space’ Then And Now 2020

Lost in Space led right into a sizable role in another beloved series, Petticoat Junction. On the CBS series, she played Dr. Janet Craig. Her credits also include appearances on Roseanne and Grey’s Anatomy, so she’s been as active as ever. But movie and show viewers don’t just love her; she’s an honorary NASA groupie. That’s their way of thanking Lockhart for helping to inspire them, real astronauts, to pursue that work.

What is June Lockhart worth?

While astronauts celebrate Maureen Robinson during their trips to the stars, June Lockhart bears two stars of her own: Hollywood Walk of Fame stars. One represents her work in major motion pictures while the other honors her work on TV. After a long, illustrious career, she now also sports a net worth of about $10 million dollars. But she would never put a price on the picture she carries in her wallet everywhere: a photo of David Bowie, one of her favorite rock and roll stars.

Lockhart celebrated her 95th birthday this June as America’s favorite space mom. She has two children, one of whom is Anne Lockhart who delved into outer space herself as an actress on Battlestar Galactica. With an open invitation to White House press briefings, she’s ready to continue inspiring others. Her active nature already does; her latest TV credit comes from a 2019 episode of To Tell the Truth.

Click for next Article
Previous article: Gene Gene The Dancing Machine! An Iconic Character In Game Show History
Next Post: Gerry Marsden, Lead Singer of Gerry and the Pacemakers, Has Died at Age 78