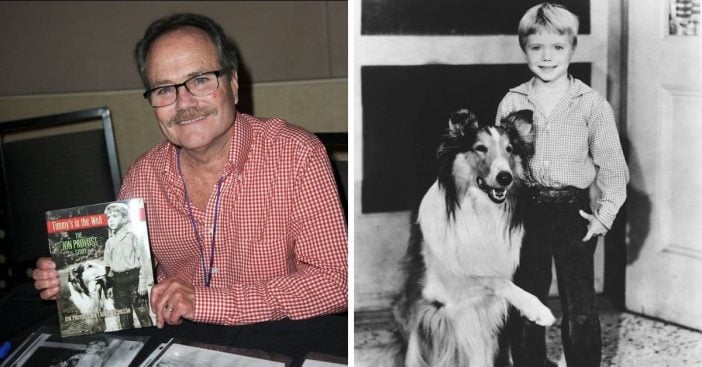 Do you remember John Provost? He played the role of Little Timmy in the 1954 TV series Lassie. Well, he is now 70 years old and looks almost unrecognizable. Timmy played the human companion to the famous dog and he still remembers the good old days. “Truthfully, the adults, the actors, made more mistakes than Lassie did. The dog and I, we enjoyed it…” he says.

Lassie (the dog) was already four seasons in when Timmy finally joined the cast at just seven years old. He soon became a fan favorite and an integral part of the show’s storyline, so he became a permanent role. Provost even remembers working with three different Lassies throughout his time on the show.

Upon beginning his teenage years, Provost then left the show. But even after Provost left, the series continued to skyrocket to popular, even earning a radio show at a certain point. Provost’s love for the show has never faltered, but he truly didn’t expect fans, years later, to still love the show as much as him. “People come up to me when I’m in a venue like that, and they will say, ‘I want to thank you because you’re the reason I’ve been raising Collies for 45 years,” he says.

RELATED: The Most Beloved And Memorable Celebrity Dogs

The show was inspired by a book titled The Shipwreck Guide to Dorset and South Devon by Nigel Clarke. The story follows the life of a collie in England named Lassie who saves the life of a sailor. Lassie has truly become a very recognizable dog, as she’s been seen in various novels, picture books, and more.

What he’s up to these days

While Provost still keeps the franchise so close to his heart, he’s obviously moved onto other endeavors throughout his life. His last acting credit, according to his IMDb, was in 2013 for a film called Susie’s Hope. In 2007, he also published a memoir to celebrate his 50th anniversary as Timmy Martin. The memoir is called Timmy’s In the Well: The Jon Provost Story. Recently, he also dabbles in some light voiceover work and other bit parts.

So, do you remember Jon Provost in Lassie?