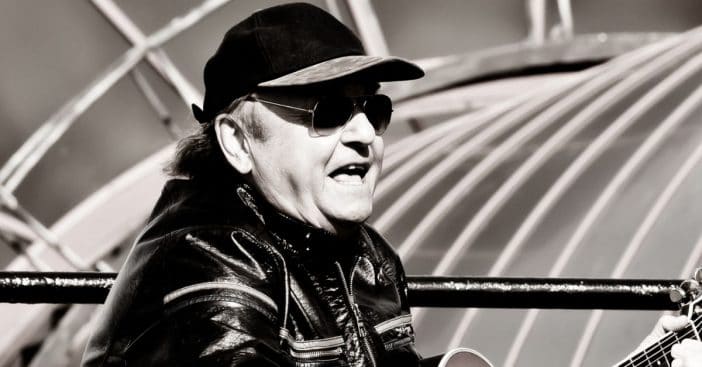 Gerry Marsden, lead singer of 1960s British Invasion band Gerry and the Pacemakers, has died at the age of 78 following a heart infection. The band’s popular hit singles include “I Like It,” “You’ll Never Walk Alone,” “Don’t Let the Sun Catch You Crying” and “Ferry Cross the Mersey.”

He was born September 24, 1942 in Liverpool, England, and rose to fame at the same time that The Beatles did. In fact, it was the success of John Lennon, Paul McCartney, George Harrison and Ringo Starr that inspired their manager, Brian Epstein, to expand his musical horizons and begin seeking out other bands, which began with Gerry and the Pacemakers. Their first hit song was a cover version of the Mitch Murray-written “How Do You Do It,” a song originally given to The Beatles, but ultimately rejected by them for a song of their own, “Please Please Me” (definitely the right instinct on their part).

Rise of the Pacemakers

In the late 1950s, music was exploding in Liverpool, best explained by John Lennon’s half-sister, Julia Baird, in an exclusive interview from a couple of years ago. “In Liverpool,” she says, “and I’m sure it was the same in the States at that time, you wouldn’t say to any of your friends who had a brother, ‘Is your brother in a group?’ You’d say, ‘Is your brother the singer, the drummer, the guitarist or what?’ Because everyone was in a group. As I write in my book [Imagine This], if you took an aerial view, there were all these groups playing on porches and in kitchens and garden sheds, and all the roofs would be jangling about. This was all the groups practicing. The only difference with John’s group was that they succeeded.”

And while none of the others reached or sustained the level of success that The Beatles did, there were nonetheless bands that made it (at least for a time) and Gerry and the Pacemakers was one of them. The band was formed by Gerry in 1959 and joining him were his brother Fred, Arthur McMahon (eventually replaced by Les Maguire in 1961) and Les Chadwick, and they enjoyed enormous popularity.

Two number one singles followed in the form of Murray’s “I Like It” and Rodgers and Hammerstein’s “You’ll Never Walk Alone.” After that, they failed to reach the top of the British charts again, although Marsden did begin writing many of the band’s singles, including “I’m the One,” “It’s Gonna Be Alright,” “Ferry Cross the Mersey” and “Don’t Let the Sun Catch You Crying” (which turned out to be their biggest hit in the United States).

In early 1965, the group starred in the film Ferry Cross the Mersey, but by the end of that year their popularity was slipping rapidly, which is a fate that befell many members of the British Invasion. Only their ability to evolve musically kept The Beatles in their top position for the rest of the decade. Gerry and the Pacemakers disbanded in 1967, though Marsden would create a new lineup in 1972 and he himself would stay active in music through the 1980s, continuing to tour and perform until the time of his death.

In his personal life, Gerry Marsden married Pauline Behan in 1965, and they were the parents of daughters Yvette and Victoria.

Previous article: Whatever Happened To June Lockhart, Maureen Robinson From ‘Lost In Space’?
Next Post: John Densmore, Drummer From The Doors, Owes His Career To His Bad Teeth