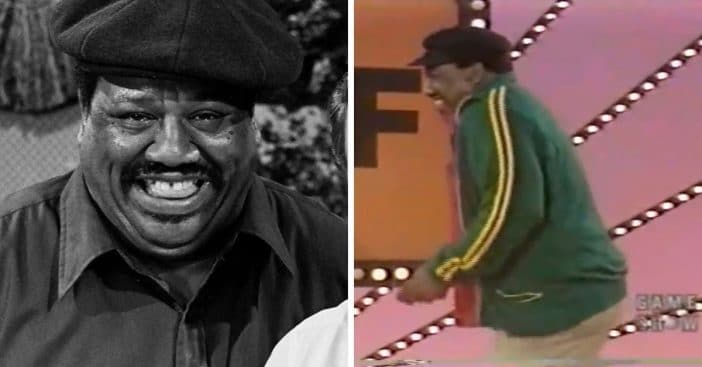 From 1976-1978 NBC aired the wackiest, craziest, funniest game show that has ever been on the air. The Gong Show featured a wide array of amateur performers with dubious talents competing before a panel of celebrity judges. Beloved host Chuck Barris led the antics.

Through the few years The Gong Show was on the air, several recurring guests became fan favorites. One of the most beloved performers to ever appear on The Gong Show was Gene Patton, otherwise known as Gene Gene The Dancing Machine!

Patton was one of several amateur performers who warmed up the audience or entertained them during commercial breaks on the show. However, Chuck Barris and the audience loved Patton so much that he was soon performing on-air. He became a recurring act on The Gong Show and even sat as a judge on occasion.

Although Patton‘s appearances became a scripted part of the show, Barris often pretended he was delightfully surprised when he shuffled onstage. The band would begin to play the first few bars of Count Basie’s “Jumpin’ at the Woodside” and on came Patton. He wore his usual green jacket and flat-billed cap. The crowd would go wild while Patton performed his unique upper-body dance and his fellow stage-hands hurled miscellaneous items onto the stage.

Patton became particularly well-known for his unique way of dancing. In Barris’ 1984 memoir, Confessions of a Dangerous Mind he wrote of discovering Patton, “One day, during rehearsal, I saw Gene dancing by himself in a dark corner. The huge stagehand never moved his feet; just his body from the waist up. He was terrific.” Patton also became the first African American member of the International Alliance of Theatrical and Stage Employees.

The Gong Show might seem bonkers, but Patton and his fellow performers still bring a smile to the faces of those who remember them. One fan wrote, “As a kid The Gong Show was my reality TV. I remember watching every week hoping Gene would be on. To the Patton family, know he brought many of us so much joy.” Another stated, “Gene had his stick, it made hearts glad, and went down in television history as one of the corniest yet entertaining acts ever.” Patton will always be remembered for the laughs and smiles he brought his fans. He once remarked of his famous name, “[Barris] said I was such a good dancer he had to name me twice.”

Click for next Article
Previous article: Tom Hanks Shows Off ‘Horrible Haircut’ For Upcoming Elvis Biopic
Next Post: Whatever Happened To June Lockhart, Maureen Robinson From ‘Lost In Space’?