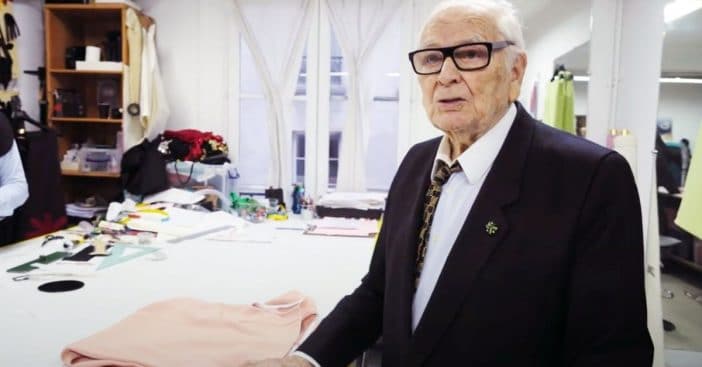 On December 29, Pierre Cardin died. At the age of 98, he’s remembered as a visionary and influential titan in the fashion world. He designed his work completely and artfully so his influence can be felt to this day across the industry.

The French Academy of Fine Arts confirmed his death on Tuesday after he passed away at the American Hospital in Neuilly-sur-Seine. The Italian-born French citizen called France home in his final years and his family confirmed further details about his passing.

“Fashion is not enough”

Born on July 2, 1922, Pierre Cardin (then Pietro Costante Cardin) came from a wealthy background. However, his parents had to uproot the family as fascism took hold in Italy. They escaped to relative safety in France. There, he spurned his father’s dream for him as an architect. Even early on Cardin showed a unique interest in other people on a personal level. As a career, he dreamed of dressmaking to create works of art that wearers could take pride in. And when World War II hit, he worked with the Red Cross to tend to the wounded.

His dreams and passions showed no sign of losing momentum. Indeed, by 1950, he opened his own fashion house. However, this man would later declare, “Fashion is not enough. I don’t want to be just a designer.” He was not. Pierre Cardin became an industry revolutionary in small and great ways that resonate today. For one, he helped establish the trend of incorporating a designer’s logo into a garment. He also helped literally reshape hems. Cardin’s lines also streamlined the idea of creating ready-to-wear garments. Thanks to that, retailers have general sizes that consumers can get the very day they venture out on a shopping trip.

“I wash with my own soap,” Cardin once mused. “I wear my own perfume, go to bed with my own sheets, have my own food products. I live on me.” All this fell in line with his view on clothing: that it should give the body its shape like a glass gives water shape. Andrew Bolton, head curator at the Costume Institute of the Metropolitan Museum of Art in New York, remembers Cardin as a visionary every day of his career. “He had this wonderful embrace of technology and was in love with the notion of progress,” he described.

That career spanned over 75 years, which gave Cardin time to witness just as much history as he helped forge. As a result, his clothing for men and women alike took on a space-age feel, to the point NASA commissioned him for his take on a spacesuit. Cardin’s work grew so famous, he was one of the first to branch out and secure deals in Japan. Quickly, countless household items bore his logo, from pens to shoes, wallets to kitchen cookware, chocolates, and even an Android tablet. Thanks to his involvement in culinary ventures, people can also eat at Maxim’s restaurant chain around the world. Though Cardin is gone, his impact seems eternal.

Click for next Article
Previous article: New
Next Post: ‘All in the Family’: Carroll O’Connor Went from Newspaper Editor and Playwright to Archie Bunker