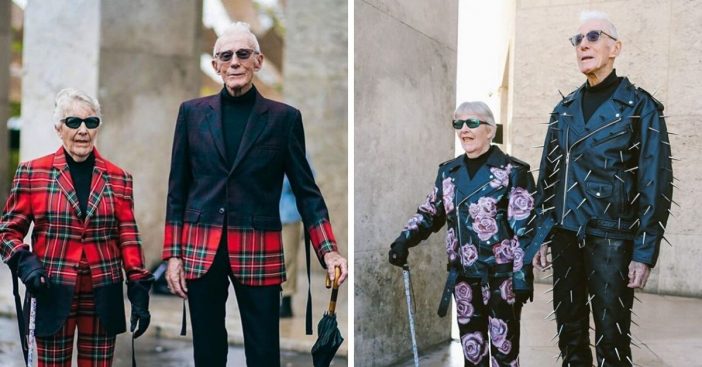 Marie-Louise and René Glémarec are in their late 80s and just walked the runway at Paris Fashion Week. Their grandson is fashion designer Florentin Glémarec. When working on his new line, he had the perfect models in mind: his adorable grandparents! Now, their photos are going viral on the Internet.

Florentin’s company is called Egon Lab and creates unisex clothing. He said that his grandparents have been his biggest support since day one. When some of the clothing pieces were ready, his grandparents tried them on and were so happy. That is when he knew they should model the clothing.

Fans instantly loved the Glémarecs and now photographers and fashionistas shout their names at shows. Turns out the grandparents love the attention they are getting. TODAY reports, “After one fashion show in Paris, security guards even had to step in to prevent onlookers from rushing towards the couple. But it didn’t seem to disturb René much. He loved being in front of the crowd.”

The couple went viral online after Vogue posted a photo of them in leather outfits. Previously, Marie-Louise worked at a post office and René retired from the Navy. They said this about their new fame, “We feel like stars, but we promise you that it won’t go to our heads. You know, at our age, it no longer goes to our heads.”