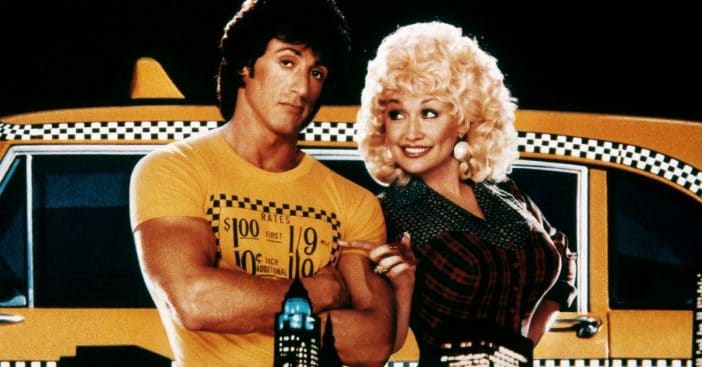 Typically, mentions of Sylvester Stallone conjure to mind images of action, explosions, and gritty punches. Above all, these come from movies. But Stallone actually broke into the country music scene – somewhat – through 1984’s Rhinestone.

By all accounts, this fell quite differently from previous work Stallone got involved in. Indeed, he rose to fame thanks to playing the underdog boxer Rocky Balboa. But Rhinestone sees him as a cab driver who must become a country star, a transformation overseen by Dolly Parton. Stallone actually gave up a lot to be there. Was it worth it?

The story of ‘Rhinestone’

Country singer Jake Farris, played by Dolly Parton, has dreams too big for the sleazy New York country club The Rhinestone she works at. Stuck in a contract, she tries an earlier bid for freedom by vowing she can make anyone a country sensation. Unfortunately, club’s manager Freddie chooses an unpleasant cab driver Nick Martinelli (Sylvester Stallone) for the bet.

The two end up stuck together and Parton’s character must help Stallone’s become a country icon. He endures culture shock and badgering because of his ignorance about the genre – and locale. While their characters start at odds with each other, Stallone reportedly embraced this longshot movie because of the singer. Good thing, too.

Commercially, Rhinestone came to be considered a bit of a flop. That might have spelled doom for Stallone because he turned down a lot by taking on Rhinestone. Reportedly, he turned down the lead role in Romancing the Stone and Beverly Hills Cop, all to work on Rhinestone, which he provided screenplay for. Twentieth Century Fox enjoyed the “fish out of water” element of the story. Of course, a movie which sees Sylvester Stallone becoming a country hit wouldn’t be complete without country music. Stallone can be heard belting out “’I’ll Be There,” “Woke Up in Love,” “Sweet Lovin’ Friends,” and more. Parton herself composed some songs just for this and they went on to be actual hits on the airwaves. Listen for yourself if you ever wanted to see professional boxer Rocky Balboa sing country.

Ultimately, though, Stallone took it as a learning experience. Sometimes, he felt, genres shouldn’t cross. He admitted, “I certainly would’ve steered clear of comedy unless it was dark, Belgian chocolate dark. Silly comedy didn’t work for me. I mean, would anybody pay to see John Wayne in a whimsical farce? Not likely. I would stay more true to who I am and what the audience would prefer rather than trying to stretch out and waste a lot of time and people’s patience.”