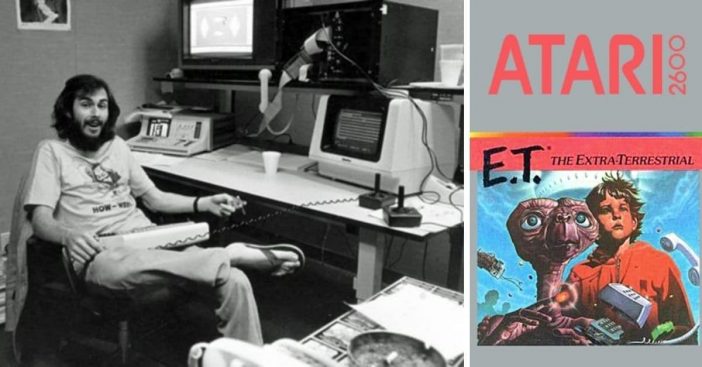 In 1982 Atari released the video game adaptation of Steven Spielberg’s beloved film E.T. Despite the success of the film, this video game is often dubbed as the worst of all time. Stories circulated that besides being an enormous flop, the game caused the destruction of Atari and the entire video game industry. But there’s more to the story than that.

The man who created the E.T. video game was not some incompetent slouch. In fact, Howard Scott Warshaw was the creator of Yars’ Revenge, one of the most popular video games of its time. He was also the first person to adapt a video game from a movie with Spielberg’s Raider’s of the Lost Ark. So why did E.T. tank so badly? Some might say Warshaw was set up to fail.

Howard Scott Warshaw was a game designer ahead of his time. He was hired by Atari in 1981 after completing his master’s degree in computer engineering. In an era of games like Pong, where a player used black-and-white virtual paddles to push a small, square “ball” around a screen, Warshaw pushed his games to be more like movies with exciting storylines. His first game Yars’ Revenge was an immediate hit. So too was his video game adaptation of Raiders of the Lost Ark. So of course when Spielberg also wanted to adapt E.T. into a video game, Warshaw was his man.

RELATED: 11 Awesome Video Games That Ruled Your Childhood, Because I Know, You Miss Them Too

That’s where the trouble began. “The negotiations for E.T. had run very long,” Warshaw remembered. Atari and Spielberg haggled for so long that in order for Warsaw to get the game out in time for the Christmas holiday, he would have to build it in five weeks. Warsaw assured the CEO of Atari that he could do it. “I don’t know exactly what I was full of at the time, exactly, but whatever it was I was overflowing with it,” he remembered. “And I believed I could pull it off. I mean the hubris of it!”

Time constraints aside, Warsaw put the full game together. The basic plot was that the player would play as E.T. and travel throughout the game gathering parts to build a phone. It sounds simple enough, but Warshaw had to take it a step further. He created an elaborate world within the game. Designed to wrap around on itself, traveling in any direction could eventually return the player to the starting point.

There were other added elements. Reeses Pieces were scattered across the gameplay, which E.T. could collect to replenish his energy. There were hidden pits in the ground which often held parts of the phone, but could also trap E.T. Elliott makes an appearance in the game to help E.T. at times. Two other characters “the scientist” and “the FBI agent” were added to make the game more challenging.

The Worst Of All Time?

Initially E.T. the video game flew off the shelves until word got around that kids hated it. The main problem seems to be the game’s disorienting and confusing nature. Its wraparound layout would inexplicably return players to the same screen over and over. The pits in the ground constantly trapped E.T. and could be difficult to escape. Perhaps Warshaw was just a little too ambitious with the complexity of the game. True each copy did come with an instruction manual that would have provided some clarity as to the goal of the game. But what kid could really be expected to sit down and read it?

Finally, the disappointment of the E.T. video game really stems from the fact that the technology just wasn’t there for an Atari 2600 to capture the same magic of the movie. Even though Warsaw’s video game-making skills were revolutionary they couldn’t compare to the film. It’s important to note, however, that the failure of the E.T. video game was not the cause of the downfall of Atari or the video game crash of 1983. Atari had made poor business decisions and was already running into trouble before the game was released. Although E.T. might have been a disappointment to kids and fans of the movie, it certainly doesn’t deserve to be called the worst video game of all time.