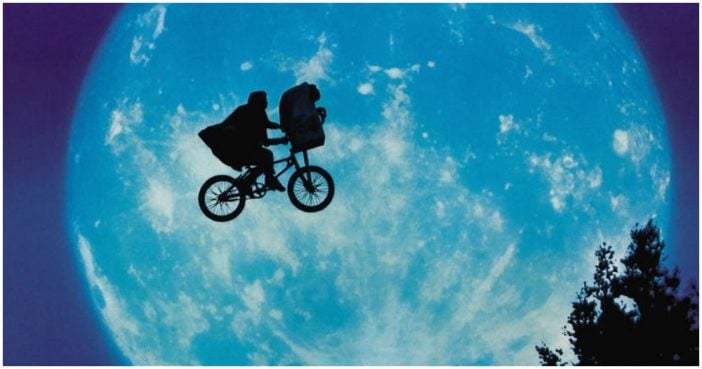 Released in 1982, E.T. was a runaway success, surpassing Star Wars to become the highest-grossing film of all time — a record it held for ten years until… Anyone… Anyone… Bueller…

Access the part of your brain that remembers something useless, like Avogadro’s Number, you’ll never need that, wipe that memory clear and store the above to wow easily-wowed friends with in future. In fact, dump a whole load of memories (holidays, previous pets, credit card PINs) and upload these 15 facts you probably didn’t know about E.T.

1. IT HAS BEEN VIEWED AS BOTH A CHRISTIAN ALLEGORY AND A TOOL OF THE DEVIL

As is the case with many great movies, people had their own interpretations of what E.T. was really about. Some critics and scholars identified a spiritual element in the film, even going so far as to suggest that the titular alien had similarities to Jesus Christ. The character wasn’t born in a stable, but he was found in a shed. He also possessed a healing touch, gathered “disciples” (in the form of Elliott and the other kids), went through a “death” and “resurrection,” and ascended into the heavens at the end. Universal fanned the flames of this idea with ads showing E.T.’s finger touching Elliott’s, not unlike the famous Michelangelo painting in the Sistine Chapel. Spielberg, who is Jewish, flatly denied the intent to put Christian overtones into the movie, although he did acknowledge understanding how people could think otherwise.

Then there was the flip side of the coin. L.A. Weekly reported that Jimmy Swaggart — a once-popular televangelist who got caught up in a sex scandal involving prostitutes — wasn’t a fan of the motion picture. He slammed the character of E.T. as being “a beast from Hell” and pegged Spielberg “an agent of Satan.” What, specifically, he objected to is unclear, but it’s worth noting that some Evangelical Christians object to the thought that there could be life on other planets, as the Bible gives no indication that this is a possibility.

2. THE 20TH ANNIVERSARY EDITION DIGITALLY REPLACED ALL THE GUNS

E.T. really isn’t a violent movie at all, but it does have a few characters who are government agents, who of course carry guns. No one in the film gets shot, though. The weapons are just there to emphasize why Elliott and his family are as scared as they are when a bunch of gun-toting Feds storm their home, looking for the alien visitor. When Universal planned a 20th-anniversary re-release for 2002, Steven Spielberg had some second thoughts about those guns. There had been a number of mass shootings in America around that time, and many people were very concerned about the prevalence of guns in our society. He felt that perhaps they were out of place in the modern day, so he had them all digitally replaced. The agents now held walkie-talkies.

This decision was met with displeasure from both critics and fans alike, who deemed it a senseless act of political correctness. More importantly, they pointed out that a landmark film like E.T. should not be tampered with after the fact. People had been enjoying it “as is” for twenty years, guns and all. Some folks emphasized that movies are like time capsules, showing the attitudes and values of the era in which they were made. Altering them, therefore, is wrong. Spielberg eventually conceded that everyone else was right. He expressed regret over the decision and vowed that all future re-releases of E.T., in any format, would be unaltered from the original version. E.T. did a whole lot right, but it also spawned what may be the worst video game in history. And when we say “the worst,” we really mean it. Think of the worst video game you’ve ever played. This one is worse, we promise. Made for the Atari 2600 system, the game let you play as the title character. Your objective was to find the hidden pieces necessary to assemble a phone so that you could call home. They were all buried in pits, which E.T. had to drop down in order to grab them. Getting back up from those pits proved to be extremely challenging, thanks to some truly horrendous controls. Aside from eating a few occasional Reese’s Pieces, that’s about all there was to the game. This scenario simply repeated until E.T. was out of energy.

The fact that it was rushed into production didn’t help matters. The game was reportedly slapped together in just a few weeks’ time to capitalize on the movie’s success. Aside from being overly simplistic, the poor controls and atrocious graphics were a real turnoff. Whatever magic the film had, the game lacked. Word quickly spread that it sucked, leading to tons of unsold units. Allegedly, there were so many game cartridges left sitting around that Atari had them all dumped into a New Mexico landfill. We’ve played the game, and trust us – a landfill is exactly where it belongs.

4. SPIELBERG RESISTED BRINGING IT TO HOME VIDEO FOR YEARS

Home video was a different beast in the 1980s. It typically took at least a year for a movie to arrive on VHS, if it arrived at all. The cost to purchase a movie for viewing in your own home was as high as $100. There certainly seemed to be a market, yet no one was sure how big that market was or how long it would remain feasible.

One such skeptic was Steven Spielberg who, for several years, refused to allow E.T. to be released on home video.The director was hounded by fans, demanding to know when they could watch his masterpiece at home. He described pressure from the public and Universal as “a war” to get his consent for a videocassette release. According to a New York Times story from 1988, the president of M.C.A. Home Entertainment (which owned Universal) said, “We finally wore Steven Spielberg down.”Part of what prompted Spielberg’s change of heart was the knowledge that people could watch a clean copy, as opposed to some grainy bootleg.

E.T. finally hit the home video scene in October of 1988 — six years after its theatrical debut — at a then-unheard-of sell-through price of $20. The tapes utilized an anti-piracy program to prevent copying and had a hologram sticker on them to assure authenticity. The release, of course, was wildly successful.