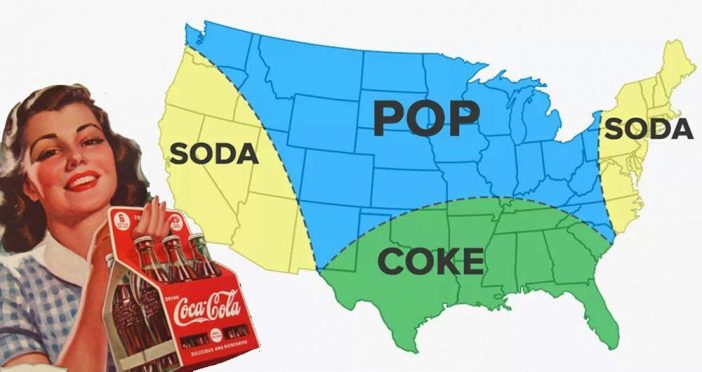 There’s nothing better than cracking open a nice, cold can of coke. Or is it soda? Some would even call it pop. No matter what you call it, these are all words that are used to describe the carbonated beverage and it seems to vary based on the location of which you were raised.

Cartographer Alan McConchie was extremely curious and decided to weigh in on this debate by changing things up. He created a web project which inquires in survey format what people call it: soda, pop, or coke? The questionnaire had the participants fill out where they are from and which term they use for soft drinks. More than 400,000 users have submitted answers.

From what the map has detailed, it seems to be a crystal clear explanation. Many people in the Northeast, most of Florida, California, and parts of the Midwest prefer the term “soda.” However, most of the Midwest and the West call it “pop” and generally all of the south calls it “coke,” even if it’s not Coca-Cola brand! Safe to say that none of us will be agreeing on the proper term anytime soon.

However, the website survey listed an option for “other,” in case United States residents were raised to refer to “soda” or “coke” as something completely different. Additionally, according to Jason Katz who wrote the book Speaking American: How Y’all, Youse, and You Guys Talk: A Visual GuideHardcover – October 25, 2016, also had some insight about the other terms that may not be as popular.

Six-percent of Americans call them soft drinks, especially in North Carolina and Louisiana. In areas of the deep south, they used the term “cocola.” Lastly, it seems like older generations in Boston, in particular, prefer the term “tonic,” although the popularity of that word is dropping.

So how did it all get started?

There’s actually a pretty lengthy history behind soda (or whatever you call it). It really started in the 18th century as a cure for a variety of illnesses, people believing that because of the carbonated water possibly containing healing powers. It was often mixed with other medicines and sold at pharmacies and became a huge hit.

Coca-Cola was invented in 1886 by a pharmacist named John Pemberton. For the first 17 years of the company, Coke was actually infused with cocaine as the main ingredient. The cocaine was derived from the leaves of a natural plant called coca, which was indigenous to Peru and Bolivia. The cocaine was popular for producing a mild euphoria, suppression of hunger, and increased physical stamina.

There were tons more messed up concoctions to follow the cocaine phase, including a mixture of cocaine and Bordeaux wine to create a restoration in energy, health, strength, and vitality. Keep in mind this was all still for the sake of health and medicine. Apparently, cocaine and alcohol were big hits.

It was not until 1903 when cocaine was officially removed from the drink due to problems associated with the drug.

Be sure to SHARE this article if you love soda (or coke, or pop)!