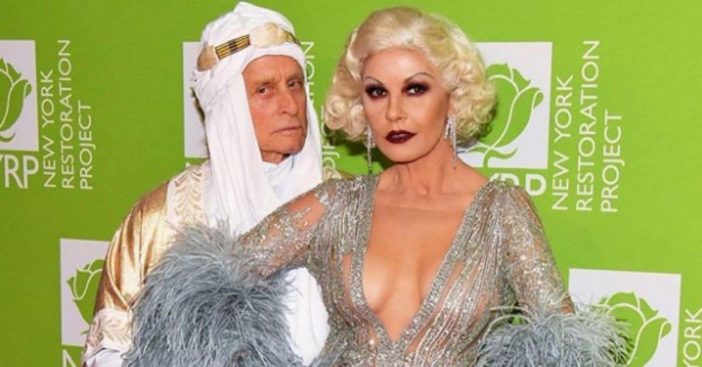 Throughout all her career, Catherine Zeta-Jones solidified a certain image for herself, and it never included blonde hair. But a recent Instagram post shows the actress with a new hairdo that leaves her unrecognizable.

Gone are the long dark tresses. In their place, viewers can see short sunny curls that sit well above her chin. All this fell perfectly on time for Halloween when Zeta-Jones became the spitting image of another entertainment icon, new hairdo and all.

I would dress up as Jean Harlow every year if I could This look was so much fun!!

Typical hairstyles worn by Catherine Zeta-Jones don’t include a short blonde bob. Indeed, she’s almost iconically associated with her long, dark brown locks. But Halloween gives everyone the chance to try a new look and call it all part of the festive fun.

That’s exactly what the Chicago actress and wife of Michael Douglas did. She used the holiday, which fell upon a Saturday this year of 2020, to dress up as Jean Harlow. She further captioned her photo, shared to Instagram, “I would dress up as Jean Harlow every year if I could.” After an emoji with hearts for eyes, she added, “This look was so much fun!!” More hearts end-capped her enthusiastic post. Her post has currently received over 90k likes from her 3.5 million followers and more that’s over eight decades in the making.

Jean Harlow, like Zeta-Jones today, became famous in part for her beauty. Both developed (and in Zeta-Jones’s case, continue to develop) admirable filmographies. But they’re also synonymous with looks that are unique to them. Indeed, Jean Harlow became one of the first and most enduring “Bombshell Blondes” of her time. She accomplished all this in just nine years in the industry.

Catherine Zeta-Jones doesn’t just use quarantine time for fun dress-up sessions. Thanks to her Instagram, followers can see updates on her life. This means seeing the quality time she enjoys with her husband Michael Douglas. From home, she also works on her homeware range, Casa Zeta Jones, Hello Magazine writes. While doing so, she’ll be recognizable again after casting aside the blonde persona…for now. But at least now fans can recognize her because based on the comments, no one could quite believe their eyes.

Click for next Article
Previous article: For The First Time, ‘A Charlie Brown Thanksgiving’ Won’t Air On Broadcast TV
Next Post: ‘Jeopardy! Greatest Of All Time’ Contestants To Return In New ABC Game Show