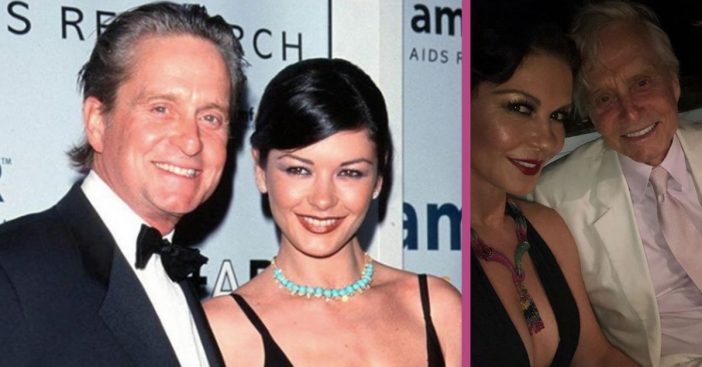 Michael Douglas recently turned 75 years old, and his wife Catherine Zeta-Jones just turned the big 5-0! They both share birthdays on the same date, even though she’s 25 whole years younger than him. Douglas isn’t concerned about that though, as he opens up to Ellen Degeneres on her show and talks about the age gap between himself and his wife.

“Having a younger bride makes me feel good on one side, and I got the old man [his 102-year-old father Kirk Douglas] on the other side with still a full head of hair,” Douglas jokes. “So it’s all good, you know, you can’t be an idiot about it.”

The age gap between Michael Douglas and Catherine Zeta-Jones

Douglas also credits his children for making him feel young, probably much younger! He has a 40-year-old son that he shares with Diandra Luker. But, he also has 2 much younger children with his current wife, Dylan, 19, and Carys, 16. Douglas says that watching his children grow up has made him feel more youthful. He says it also helps with his overall health as he is now completely healthy!

“I’m moving right along,” Douglas states. “I had cancer about eight or nine years ago where I sort of thought about that stuff. But once I got a clean bill of health after that, it was kind of straight on, feeling good.”

Cheering his wife on in life

Douglas says he also loves his wife’s new outlook on like. She says in the last few years she’s really changed her perspective on life and being a part of Hollywood. “One thing I’m not is humble anymore,” she says. “I’m sick of being humble. I really am. ‘So sorry I’m rich. So sorry I’m married to a movie star. So sorry I’m not so bad looking.’ No sorrys. Enough. All that is important to me now is my work.”

Douglas responds to his wife’s outlook, saying, “She comes from humble roots. She’s a humble young lady. If you got it, flaunt it. She’s probably saying, ‘I’ve worked hard enough.’ She earned it.”

Douglas adds on, gushing about his wife’s versatility, “She’s got a whole branding line of Casa Zeta-Jones, and she’s on QVC, and she’s an entrepreneur and I totally support her! The acting roles, particularly for ladies at a certain age, become much more difficult. This is something where you can actually control your life so she really enjoys it.”

These two make such a lovely couple!