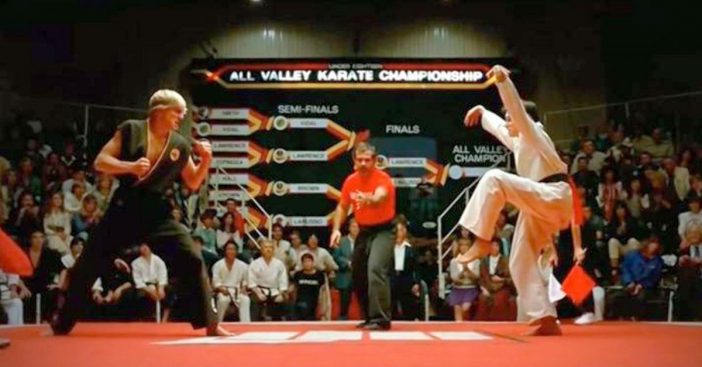 Rocky’s the best, around. Nothing’s gonna ever keep him down, he’s the best, around! That was the sentiment meant for Rocky Balboa in Rocky III. Instead, the movie’s song became “Eye of the Tiger.” But then what happened to “You’re the Best?”

Ultimately, that song stilll ended up with a movie featuring a lot of fighting. Except, instead of boxing, the main character mastered karate. Hints of this transition actually exist in the unchanged lyrics of the song. And this tune isn’t the only thing tying these classics together.

1981 saw the third installment in the Rocky franchise enter the production phase. But this endeavor required a lot of moving parts – including a rousing soundtrack to suit the theme of the movie and its actions. For this, music master Bill Conti collaborated with lyricist Allee Willis and singer Joe Esposito. They understood Sylvester Stallone wanted a theme that had a youthful flair to it. So, they composed “You’re the Best,” specifically with Rocky III in mind. Remember this for later…

However, Stallone reached out to Jim Peterik, founder of Survivor. After seeing a montage of film footage that shows where the song would be featured, Peterik worked with Frankie Sullivan and made a song that fit the movie’s theme and action. Stallone ultimately passed on “You’re the Best” when confornted with it and instead fell in love with “Eye of the Tiger.” In fact, all it took was the song’s demo. This ended up a fortunate turnout because their schedule was tight so they just used that demo of “Eye of the Tiger” for the final cut of the movie. The song went on to reach No. 1 on the Billboard Hot 100 chart for six weeks in a row.

Rocky III released on May 28, 1982. In the next two years, “You’re the Best” faced a bumpy road, having been rejected by Flashdance as well in favor of the song “Maniac.” It seemed a track without a movie, until a director by the name of John G. Avildsen came along. By this point, he’d directed the hit Rocky (1976) film and had a new fighting-themed project underway: The Karate Kid. Upon hearing “You’re the Best,” Avildsen loved the track so much, he too used its original iteration for his movie.

The bonds between The Karate Kid and Rocky III continue. First and foremost, they share a director, at least for some of the films, and essentially a song. But also, traces of this tie exist right in the lyrics. Because Esposito, Conti, and Willis composed “You’re the Best” with Rocky III in mind, the line “history repeats itself” suits Rocky’s third big installment but not Daniel LaRusso’s first All-Valley Karate Championship. In a way, the spinoff series to The Karate Kid, Cobra Kai, references this connection. The main character, original antagonist Johnny Lawrence recalls his first date occurring right when “Rocky III had just come out.” The Karate kid himself Ralph Macchio was, unsurprisingly, a major fan of the Rocky series. So imagine his delight when a song destined for Rocky III ended up playing for his character’s own big fighting montage.