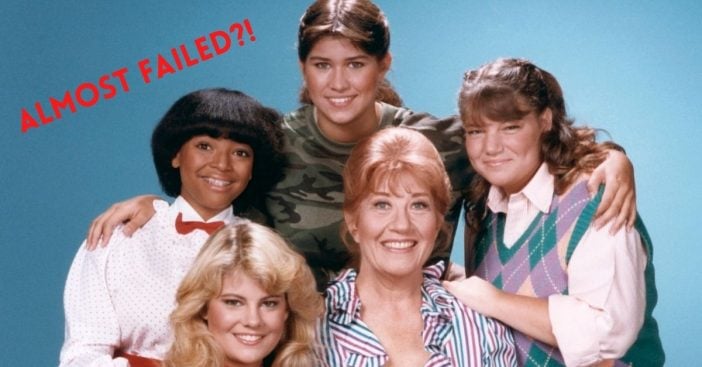 As the ’70s came to an end, the American appetite for television was stronger than ever and sitcoms were a hearty staple of the American TV diet. Unlike today, back in 1979, there were only three major television networks fighting for viewership. CBS, ABC, and NBC. ABC was King of the hill with a powerhouse comedy line up featuring hits like Mork and Mindy, Laverne and Shirley (both Happy Days spinoffs, by the way), and Three’s Company. CBS was riding high on the legendary M*A*S*H, and NBC was in dead last with barely anything. NBC was doing really bad, like, I mean really bad… like they needed something to save the company from going bankrupt bad. Executives at NBC realized the other networks were dominating with schedules filled with comedy. The only successful comedy sitcom NBC had was Norman Lear’s Diff’rent Strokes starring the legendary Gary Coleman.

Along with creating Diff’rent Strokes, Norman Lear was the mastermind behind a string of comedy hits including All in the Family, One Day at a Time, and The Jeffersons. When NBC decided they needed a hit comedy, naturally, they went straight to Lear. Lear wanted to make a female version of Welcome Back, Kotter, which at the time was nearing its end. However, in its first two seasons, it was wildly popular, even selling out merchandise. This female Welcome Back, Kotter show prototype would eventually become the legendary sitcom of the ’80s, The Facts of Life. This is the real story behind the show you won’t hear anywhere else.

Why ‘The Facts of Life’ almost failed

Because The Facts of Life became so popular in its own right, many people forget it was actually a spinoff of Diff’rent Strokes. Charlotte Rae a.k.a. Ms. Edna Garrett was the Drummond family housekeeper and unexpectedly proved herself to be a show-stealer. She’s actually the first character the audience meets in the very first episode. The location that The Facts of Life takes place at, Eastland School in Peekskill, New York, is the same school Dana Plato’s character, Kimberly, from Diff’rent Strokes attends although she never appears in an episode.

RELATED: What The “Facts of Life” Cast Looks Like Today

Lear knew he wanted Charlotte Rae to lead this new show, but it wasn’t that easy. Rae called Lear crying hysterically because she couldn’t get out of a contract she had at CBS to do the show. The crying was short-lived as Lear assured her CBS owed him a few favors and he would take care of it. Needless to say, yeah, that contract wasn’t a problem. Whoever Norman Lear wants, Norman Lear gets. And we all win for it, because who else could be Ms. Garrett?

The first season was a complete disaster

Charlotte Rae ended up signing a sweet deal that allowed her to go back to work on Diff’rent Strokes if The Facts of Life didn’t work out. This deal was actually worked into the storyline of the very first episode. Both Mr. Drummond and Ms. Garrett talk about how temporary this new arrangement might be, showing NBC’s real confidence in the show- not very much.

With Charlotte Rae cast, it was time for the girls. None of the girls had that much experience in the biz but Mindy Cohn, who would go on to play Natalie, had never acted a day in her life. Mindy was discovered while the producers were visiting private schools and interviewing real students as part of their research for making the show. Out of the many school children they talked to, Mindy stuck out. In fact, Mindy made such an impression on the crew that they wrote a role for her. When the principal of Mindy’s school called her into his office to break the good news, she remembers just being relieved that she wasn’t in trouble. There is no possible way 13-year-old Mindy Cohn could imagine what was really in store for her.  I wish my principal called me into the office to offer me roles in legendary sitcoms. The only reason I ever got called to the principal’s office was… well, let’s not get into that.

Needless to say, the first season was pretty much a disaster. Critics trashed it and it finished a grand stinking 74th in the ratings. But NBC literally couldn’t afford another failure. They didn’t have enough money for a brand new show so they had to make do with what they had…. kind of. They actually wanted to make do with less. For the second season, more than half the cast would get the chop.

After the disaster of the first season, they hired all new writers and in a historical first, all the writers were women. The producers wanted the characters to be more real and the new writers agreed. It was impossible for the kind of character development NBC wanted with eleven main characters. Somebody or somebodies had to go. Only three girls remained after the chop – Blair, Natalie, and Tootie. But still, something was missing, they needed an edge. And so enters Nancy McKeon a.k.a. Jo. The badass with a heart of gold and the perfect foil to Lisa Whelchel, as the prissy, superficial, and condescending Blair.

Interestingly enough, Blair was actually the opposite of her character in real life. She hated wearing makeup and even taking showers. But that’s okay, it’s just acting, it’s not real life. You can be whoever you want to be behind the scenes, right? Well, when you’re hired to be the extremely vain girl everyone loves to hate, well, how do I put this… Blair’s weight became a huge problem on the show. They hired her nutritionists, encouraged her to exercise, and got rid of all junk food on the set. Nothing worked and eventually, the producers would walk into her dressing room every morning with a scale. All to try and get her to lose weight.

But nothing really worked. You can’t force a diet on somebody who doesn’t want it. You’d have to keep them under surveillance 24/7 and that’s not really possible. Actually, all of the girl’s weights fluctuated throughout the lifespan of the show which was fodder for the late-night circuit. Joan Rivers made a joke about this that would be a hard one to shake for the show. Joan referred to the show as The FATS of Life.

Despite anything, the show goes on, and ratings go up

The redesign for the second season is what many fans consider the real Facts of Life and the show immediately saw a huge rating increase. By the third season, The Facts of Life was the number one comedy on NBC and the number two show overall, outperforming its predecessor Diff’rent Strokes. The student becomes the master. Although it didn’t solve all of NBC’s problems, it was the shot in the arm they desperately needed. It was a reliable ratings workhorse that went on to become one of the longest-running sitcoms of all time, airing new episodes from 1979 to 1988. But many of those years were not spent here at Eastville.

After Blair and Jo graduated in the finale of season 4, the producers had to come up with a way to keep the girls under one roof for season five. And this required major changes to the show. In the hour-long season five premiere, “Brave New World,” Ms. Garrett opens up her own business called Edna’s Edibles. All four girls would live and work with Ms. Garrett in the new store and this is where most of the show would now take place.

Even without Ms. Garrett, the show continues to succeed

However, in season 7, the store was burnt down and the girls had to rebuild the store, which now has a pop culture theme to it. Once again changing up the set. And that’s not all that changed, a new cast member would also be introduced to shake things up. Enter, the now-legendary Geroge Clooney who back then was pretty much a nobody.  He was just a guy who would come hang out, it was kind of weird actually. Even cast members joked about how strange it was for a grown man to be coming by for no reason to hang out with teenage girls. In most episodes, there was no clear reason why he entered the scene. Despite all these changes, the show continued to perform well in the ratings and the show went on.

In the heavily-promoted hour-long premiere of season 8, after having a reduced role for two seasons, Ms. Garrett finally leaves the show altogether. In the episode, Ms. Garrett goes off to join the Peace Corp and convinces her sister, played by Cloris Leechman, to take over the business. Charlotte Rae simply felt she had done all she could with the character of Ms. Garrett and wanted to move on. And even without Ms. Garrett, the show was still doing numbers. Viewers kept tuning into the show and it was renewed for a ninth season. Solidifying The Facts of Life as one of the longest-running sitcoms of all time and firmly cementing its place in TV history.

Shaking things up with controversial episodes

Spectacularly, the ninth season contains the highest-rated episode of all time. For a ratings boost, the producers wanted to make a controversial episode where Blair is the first of the four girls to lose her virginity. But based on her Christian faith, actress Lisa Whelchel refused to do the episode. In fact, she asked to be written out of the episode entirely. NBC granted her wish and it’s the only episode Blair is not in. Instead, Natalie is the one that loses her virginity.

With some of the best ratings the show ever enjoyed, NBC was happily making plans for season 10, but sadly it would never happen because Mindy Cohn a.k.a. Natalie and Nancy McKeon a.k.a. Jo both refused to do the show. They simply wanted to move on.  What is unique about The Facts of Life is that behind the scenes, everybody really did get along and the four girls are close friends to this day. They even have a group chat going together on their phones!

No one expected The Facts of Life to go on for as long as it did, not even the people working on the show. Even after all the changes made throughout the years, the show was still going strong ratings-wise, consistently winning in its time slot. Very few shows are canceled even though they are doing well, and very few shows run for nine years straight with audiences still wanting more. The Facts of Life is kind of an under-the-radar smash. Even though it was a comedic show, it had substance. The show tackled a variety of serious issues, fearlessly. The first show was about a young girl questioning her sexuality. A delicate subject today, but even more so in 1979. Despite its stellar performance with audiences, not only during its original airing but also in syndication long after the show was canceled, The Facts of Life is often overlooked with respect to the greatest shows of all time. Why do you think that is? Let us know in the comments.