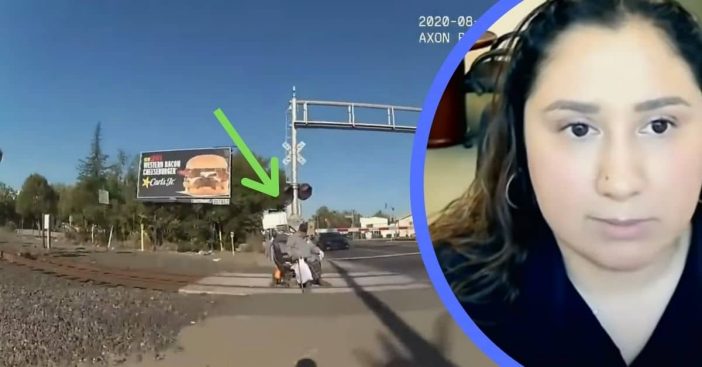 It sounds like the stuff of movies but films get their inspiration from real-life plenty of times. In California, a typical day quickly turned serious for one man. Fortunately, a nearby officer found herself at the right place at the right time to stop a disaster on the railroad tracks.

Timing and location could have been fatal for one man at the Union Pacific Railroad tracks. Wheelchair-bound, he ended up stuck right as a train headed for his chair – and him. That day, she displayed the qualities of a true hero.

An officer spots someone on the railroad tracks

One Wednesday, Officer Erika Urrea sat in her patrol car as a member of Lodi, California’s police force. As she patrolled near the Union Pacific Railroad tracks, she spotted someone on his wheelchair. Nothing would have been of note, except the man happened upon some very dangerous circumstances.

While he was on the tracks, the barriers lowered on either side of him. Additionally, his chair appeared stuck in the tracks anyway, barriers or not. Officer Urrea saw the man – and she saw the train heading right for him at its full speed.

Like many other officers, Officer Urrea wore a body camera that day. It captured her leaping from her patrol car. The footage follows her hurrying over to the man on the railroad tracks, where she proceeded to help him with the chair. Urrea used her experience as a 14-year veteran of the force. As a single mother, she likely has no shortage of protective instincts either.

The wheelchair proved completely stuck, so instead the officer pulled him from the chair, off the tracks, and over to safety. Not long after, the train plowed right into his chair and continued on its way, indifferent. There was nothing indifferent about the man’s family’s reaction to Urrea saving his life, however. Through her efforts, the officer got his upper half off the track, but his legs remained partially on the rails. He ended up losing one leg and fracturing the other. He is recovering in the hospital thanks to her quick thinking and daring bravery. At the end of the day, though, speaking to ABC News, she says it’s a simple matter of seeing someone in need of help and going out to help them.