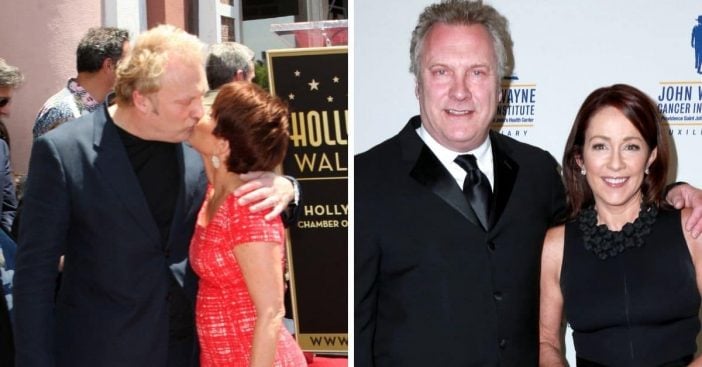 Patricia Heaton is best known for her roles in Everybody Loves Raymond and The Middle. She plays a mother and wife on both sitcoms. She likely acts from experience since she has been married for 30 years to husband David Hunt. They have four sons together.

David is an actor as well. He is best known for Blue Bloods, Homeland, and Mad Men. David and Patricia also own their own production company called FourBoys Entertainment. You may even remember David on Everybody Loves Raymond! He guest-starred as the neighbor, Bill Parker.

Patricia talks about her 30-year marriage

The actress has opened up about her marriage and when she knew it would last. She said, “You remember being in junior high school, with the full flush of first love? That very same kind of heady blood rush and love lust still thrives on movie and television sets and in theaters to this day. They are artificial and temporary worlds where the actors have a hard time separating the roles they play onscreen from the reality offscreen.”

RELATED: Patricia Heaton Says This Was Her Favorite Character In ‘Everybody Loves Raymond’

She continued, “It’s tough to be with one person for the rest of your life, when you both grow at different rates and in different directions. You have to figure out how to grow differently ‘together.’ There’s a misconception that romance you had when first married is supposed to be there all the time, or that’s a sign the marriage is over or that you no longer love each other. When things get tough, you have to be able to withstand the pressure.”

How she knew it would last

Patricia recalls the moment she knew that their marriage would last. It was when their son Sam was young and he was very sick. Soon after, Patricia and her husband both caught the stomach bug. They were up all night sick and trying to care for their infant.

Patricia said, “Dave lifted his glass and, gazing lovingly across the table, gave thanks for all his blessings and toasted me, his bride. I thought, ‘Wait a minute. Just two days ago this guy saw me with greasy hair, purple circles under my eyes, and skid marks on the back of my jammies. Either he’s legally insane or madly in love!’ I pick madly in love – and you can quote me on that.”