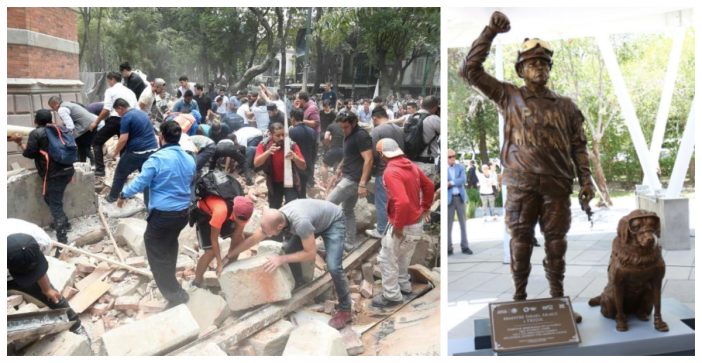 Frida, a Navy rescue dog, and her coach Israel Arauz just received their own joint statues for their help during the aftermath of an earthquake in Mexico last year. It was reported that Frida apparently located several people beneath the rubble of the earthquake debris, more than any other Mexican rescue dog.

It was reported on multiple news networks that Frida the hero dog saved a total of 12 people from underneath the earthquake rubble. The joint statues are also accompanied by a plaque. Many people have posed with the dog for pictures after she rose to fame for her heroic work!

It was reported that Frida was one of 15 search-and-rescue dogs deployed on that day. Her rescue gear consisted of goggles, a harness, and 4 little booties for each of her paws. Though the earthquake resulted in the deaths of at least 286 people, no one can thank Frida enough for a job well done in rescuing whoever she could find.

The rescue dog has completed over 52 rescue missions from a number of natural disasters just like this one. The Navy put together a collage in Frida’s honor from all of her different rescue missions and posted it online. It received a high volume of likes and retweets.

Since the earthquake in Mexico last year, Frida helped detect the body of a police officer after an earthquake struck Oaxaca. Additionally, they’ll be taking Frida’s skills over to Mexico City, where she’ll be searching through rubble at an elementary school.

Unfortunately, only 12 of the 52 people that Frida has detected over the years have been found alive. There is apparently an entire team of dog rescuers, including canine companions Evil and Ecko. Those two are sent into collapsed buildings first to detect any sign of bodies underneath the rubble, and Frida is sent in to confirm.

“The dogs bark if they detect signs of life. If they find a corpse, they stop suddenly, then carefully proceed,” says Israel.

Frida’s work has been so positively noted in her community that people have even proposed she run for president.

Be sure to SHARE this article if you loved this heartwarming rescue story.