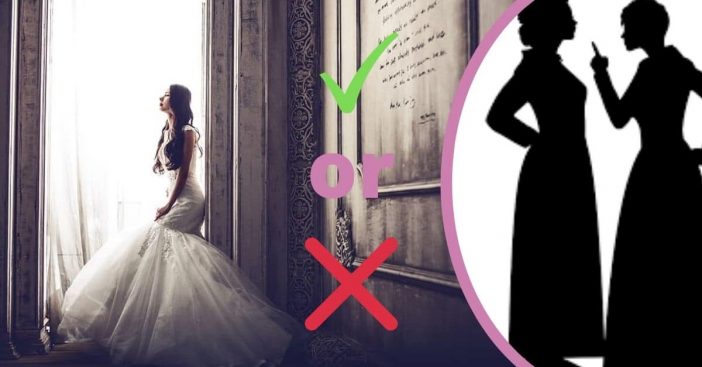 Weddings can bring out the best love and the worst drama. All this can happen even before an actual wedding takes place. When one woman told her family she would keep her future wedding dress, they allegedly grew angry and dubbed the decision “selfish.”

All the while, the woman in question did not actually have a wedding dress or wedding looming in the near future. However, they disapproved of her choice to hold onto the future prospective dress instead of passing it on. Others in the family would use it too, given the chance.

One popular Reddit thread involves talking out various real-life situations. Getting feedback from objective strangers helps put things into perspective for everyone. A 23-year-old user who writes under the name gegen_wind shared her family’s tradition of passing on various clothes. She writes, “When I was younger it was sort of a ‘tradition’ that whatever nice clothes I had were passed onto the younger ones. That included the dress I wore to my first communion which was a very big deal. The dress is now ruined although I had intended on keeping it.”

RELATED: Groom Jokes About 2020 Not Being ‘The Best Year’ As Lightning Strikes Down At Wedding

She goes on, “This tradition stopped when they all started to outgrow me. (I am about 4’10.)” With this precedent in mind, the family seems to have extended this policy to a lot of other outfits. The Reddit post author allegedly chatted with her family and shared some different wedding dress ideas for whenever her big day would arrive. Her sister, however, reportedly objected along the lines of, “God no, that is hideous, I don’t want to wear that on my wedding day.” Immediately, that became a problem. At the end of the day, her statement shaped what the post author could pick out.

Sharing leads to caring, but does everyone care equally?

Initially, the original author did not think much of her sister’s comment. That changed very quickly. She writes on, “I thought she was joking but then my mother chimed in and said, ‘No, no, you’ll have to choose something your sister likes as your dress will be passed onto her just like we did with the dress you wore during your first communion! It would be so nice to see all girls of the family wear the same wedding dress.’”

That, however, went against the user’s plans to keep her wedding dress in the future. Neither mother nor sister took this news well, allegedly, and said this “selfish” choice was “depriving the family of a nice tradition.” Since the discussion went live, it received over 10k upvotes, which keep a story at top relevance in a thread. Many agree with the user’s indignation and hurt feelings. Some accuse the mother of favoritism while others note that traditions are nice, but everyone should be a willing participant. On the other hand, how much use do wedding dresses see after their first use? Even then, though, she would need to choose a style future brides could like. What do you think about the situation?

Click for next Article
Previous article: This ‘I Love Lucy’ Guest Star Went To Great Lengths To Avoid Desi Arnaz’s Advances
Next Post: The Strange Ending Of ‘Grease’ Finally Explained