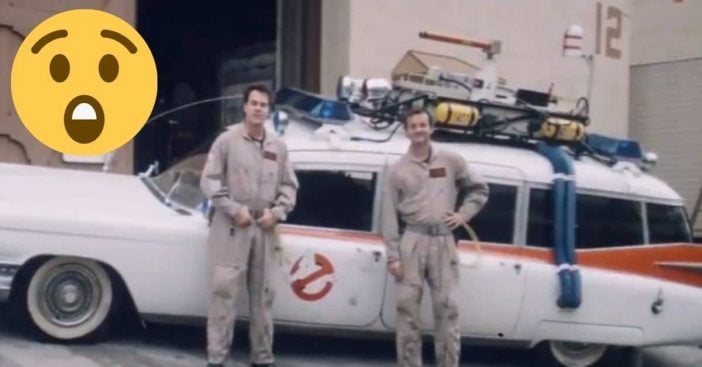 Back in the ’80s, it was commonplace for stars of new movies to make promos in order to sell the film to movie theaters. Bill Murray and Dan Aykroyd got together to make a hilarious promo in order to promote the very first Ghostbusters movie.

Recently, screenwriter and actor Todd Spence decided to share the promo on Twitter. He captioned the video clip, “This is amazing. Dan Aykroyd and Bill Murray shot this short film for independent theater owners to sell them on showing ‘GHOSTBUSTERS.’ And check out that original theme song too. Rad stuff.”

This is amazing. Dan Aykroyd and Bill Murray shot this short film for independent theater owners to sell them on showing GHOSTBUSTERS.

And check out that original theme song too. Rad stuff. pic.twitter.com/rODR2GXXIE

In the clip, Bill says, “(T)his (movie) is gonna make ‘E.T.’ look like ‘Raiders of the Lost Ark,’ you know what I’m saying? This is gonna be the kind of thing that your children are gonna say, ‘Dad, I can look up to you now, but I never could before.’ Isn’t it worth it? Isn’t it worth it? God, I mean, we made a lot of cheap movies for you guys that made a lot of money, but now we kind of spent a little more than we’re supposed to.”

RELATED: The Nostalgic Trailer For ‘Ghostbusters: Afterlife’ Is Here

Dan pipes in, “Columbia Pictures has spared no expense to make this… a fine science fiction comedy spectacle.” In the video, there is also another version of the iconic theme song. Turns out that the theme song wasn’t finalized yet when this promo came out.

Of course, everything turned out great because movie theaters picked it up and fans have loved the movie for decades. It has even spawned several sequels, including one coming next year. Warning: there is some swearing. Watch the full version of the promo below… it is so cool!

Click for next Article
Previous article: The Strange Ending Of ‘Grease’ Finally Explained
Next Post: There Will Be No Peeps Distributed For Halloween Or Christmas This Year