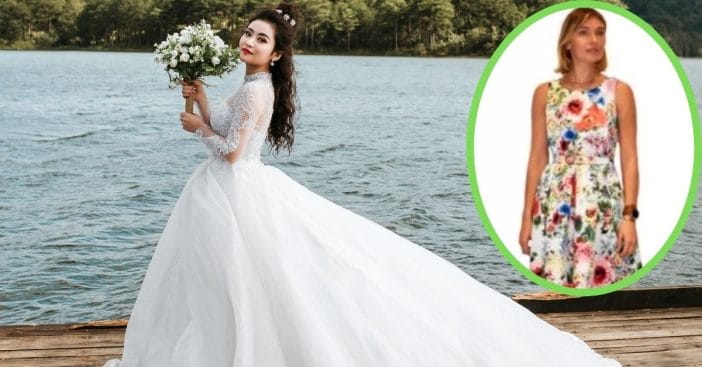 As a general rule of thumb, women attending a wedding are expected to avoid wearing white, reserving that for the bride. Sometimes, off-white shades like ivory sparked some debate, but a new Reddit discussion has posed a whole new angle to consider: printed floral.

On the expansive forum website Reddit, users sometimes present scenarios under the topic “AITA?” This acronym asks if the post writer is in the wrong in some situation. A post by user Amazing-Time-4044 wants to know if her fashion choice was wrong for a wedding.

AITA for wearing a PRINTED white dress to a wedding? from AmItheAsshole

“So one of my mom’s family friend’s oldest daughter had a wedding this past weekend,” a post from a little over a week ago outlined. “For the wedding, I wore a floral multicolored dress with a white background.” The user adds she “honestly thought it was fine because of the floral print which takes up the vast majority of the surface area of the dress.”

Afterwards, however, “I got many angry calls from the bride, who started b****ing about how I f***ing upstaged her with my so called white dress. Like I said before, it wasn’t a white dress. If anything it would be considered a multicolored dress, which just happened to have a bit of white background, which isn’t even the first thing that someone would notice.” The user claims no one at the ceremony called the dress inappropriate or a violation of wedding fashion manners.

How to judge this uncharted territory?

The user provided a link to a picture to better help answer the question, “AITA?” The link leads to a DressBarn item called a Garden Party Jacquard Midi dress. The sleeveless garment falls to the model’s shins and features an extensive pattern of multi-color flowers on a white background.

The post author offered the disclaimer that the dress is “not an exact replica but pretty close.” Reading her story and seeing the image, many responses deemed her not in the wrong. “That is not an inappropriate dress for a wedding,” one response reads. “I was fully expecting something with a tiny print for the upset level you described her as being.” Another user simply decreed, “That’s a floral dress.” One user pointed out the state of wedding manners and expectations, and the mounting intensity over the years. “It seems there is a massive divide between people when it comes to even a hint of either white or black for a guest at a wedding,” they wrote. “Some wouldn’t care at all and others think it’s a massive issue.”

What do you think of the user’s dress choice? Acceptable, inappropriate, something that should have been talked about, or something else entirely?

Click for next Article
Previous article: Disney World Has Been Open 50 Years Now, And Some Employees Have Been There Since Day One
Next Post: 10 Stars Who Gave Up Fame To Work Normal Jobs