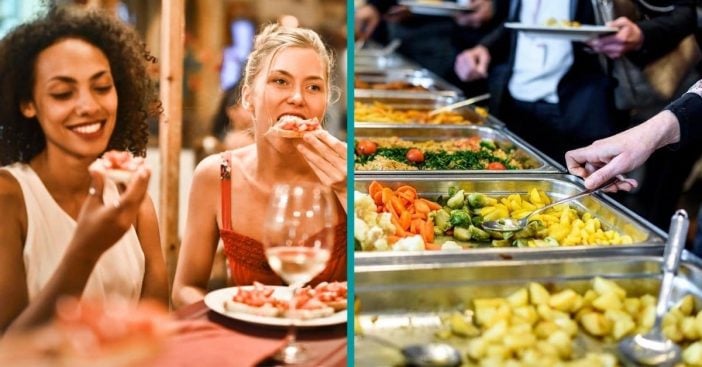 A lot of people love taking advantage of buffet restaurants because they believe they’re getting a great deal for an “all you can eat” service. This actually may not be the case. Mashed recently posted a new video detailing the ways that buffet restaurants could be scamming you out of your money and time.

Mashed reports that while you may believe you’re getting an awesome deal, it’s important to remember that these restaurants are in it for the profit. This means that they are enforcing some pretty sneaky tactics in order to make some good money off of you while keeping the customer unknowledgeable to the practices. Here’s how these buffet restaurant chains are scamming you.

1. Buffets = customers do all the work

Yes, it’s true. You go up to the buffet line, help yourself to food, and have to clean it up after, too! This means that a lot of the work normally delegated to waitstaff is put on the customer. This results in the restaurant actually being able to save money because they are reduced on waitstaff and don’t need to pay them.

2. It’s likely they could be serving you repurposed food

Gordon Ramsay would not like this! There’s a pretty high cost of food waste throughout the restaurant industry that all establishments have to consider. While most of us would like to believe the food is fresh, it’s possible that the soup you’re pouring for yourself is actually some scraps from entrees the day before. The Hustle reports that “between 5 to 25-percent of every food dish at a buffet ends up in the trash,” so it makes sense why this practice is utilized. Doesn’t make it any less unappealing though.

Eating seafood at a restaurant might cause you an upset stomach a few hours later, so beware. A Diply article recounts a Reddit user/buffet manager warning people to steer clear of seafood at buffets, specifically the crab legs.

“I have seen Chinese buffets at the fish market going and buying the bottom of the barrel seafood including crab legs past their prime. And then they don’t steam them properly to save on volume.” Definitely not a good thing to eat seafood past its prime, but luckily for Sushi lovers, Sushi is something you can usually trust to be fresh.

The typical dinner plate is 11 inches, but buffet plates are smaller than that. It’s common for a lot of restaurants to be pretty generous with portion sizes, but you may not be getting those generous portions at a buffet. Even though it’s “all you can eat.” Mashed has a report included from Babble Top that says “dishware manufacturers even have special lines of dishware geared to buffets called “half-size” dishes. Buffets want you to take less food with each serving.”

Of course, you can still go back for more, so a lot of people do see it as a great deal still.

5. Buffet pricing comes down to psychology

There’s a very specific rhyme and reason behind pricing at a buffet. We have learned this based on a study published in 2014 in the Journal of Sensory Studies. Mashed reports that “people who paid different prices for the exact same buffet (one group paid $4.00 while the other group paid $8.00), ended up feeling differently about their meals. Those who paid more found the meal more satisfying, perceiving the food to be of higher quality. Conversely, those who paid a lower price perceived the food to be worse, ultimately enjoying the meal less.” Wow!

Have you ever been to a restaurant and noticed that the most expensive meals are served on smaller plates and in smaller portions? Yeah, they do this on purpose and it’s no different for buffets. A good example of this is a plate of oysters. At buffets, it has a lot to do with the social pressure surrounding food. If the plate on the buffet has 10 oysters, people are likely to take about 1 or 2, to ensure that others in line have the option. This is instead of taking 10 oysters for yourself at the buffet line.

Check out Mashed’s video below for more interesting information on how buffets could be scamming you!

Click for next Article
Previous article: Here’s Why Slot Car Racing Is Still Going Strong With Old And New Generations
Next Post: Why ’60s Hit “My Boyfriend’s Back” Is One Of Billboard’s 100 Greatest Girl-Group Songs Of All Time