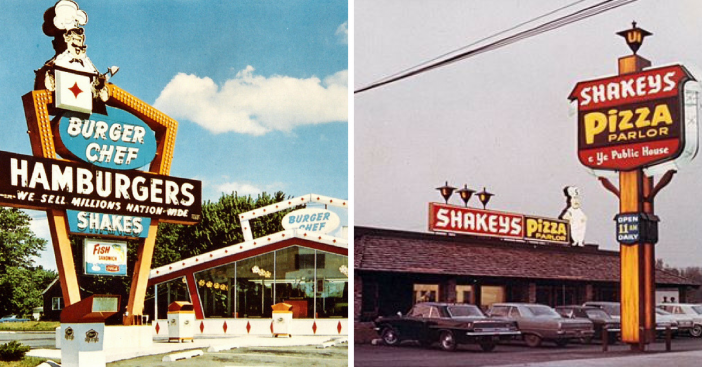 Over the years there have been plenty of restaurant chains that we have seen come and go. Every now and then we’ll think back to some of the delicious plates and meals that we had at these restaurant chains. Sometimes it’s not even just the food that gives us this lingering sense of nostalgia; everything from the logo to the inside of the place also can spark those feelings of the past. Some of these places still exist, but there are very few of them left.

Below are some of the former restaurant chains that we grew to love and that our taste buds have unfinished business with. We have provided old commercials to add even more nostalgia for you!

Believe or not, back in the early ’70s, Burger Chef was said to surpass McDonald’s. Take a second to let that sink in. You’re probably wondering what happened… Well, in 1968 General Foods purchased the company and then in 1982 they sold it and went out of the burger business, unfortunately. The restaurant chains had 1,200 locations, which was great for the time. After they closed the Burger Chef restaurants, many of them transformed into Hardee’s.

From 1954 to 1984, Shakey’s Pizza was a popular chain pizza parlor. It was founded by Sherwood Johnson, nicknamed “Shakey” after experiencing injuries in World War II. With the help of Ed Plummer, Shakey’s idea of inventing a pizza place that also served beer and had live jazz performances became a reality. There were 500 locations opened in the U.S by 1974 but by 1984, the chain was sold and bought out.

Founded in 1975, Chi Chi’s was a Mexican restaurant that had specials like their famous chimichangas and their special dessert, their Mexican Fried Ice Cream! Unfortunately, the restaurant reached its demise around 2003 when a Hepatitis A outbreak began to infect customers in Pittsburgh, Pennslyvania. After a lawsuit was filed against the chain, Chi Chi’s was closed down in 2004.

Originally founded in Portland, Oregon in 1963, Farrell’s eventually expanded around the nation. Known for its 1900s theme inside, Farrell’s also served burgers and fries. The place would also give customers free sundaes on their birthdays! The place eventually closed down in 1990 due to declining sales.

An east coast-based burger parlor, everyone remembers Gino’s delicious and tender burgers from the ’60s and ’70s. The chain had over 350 locations at its peak. “Banquet on a Bun” was the name of their delicious burgers that everyone loved. Unfortunately, Gino’s was bought out by Marriott in 1982 and then eventually turned into Roy Rogers restaurant chains.

Click through to the next page to see which other restaurant chains we miss!

Page Page 1 of 2
Previous article: 2nd Grader Grabs His Guitar And Brings Down The House With A Johnny Cash Classic
Next Post: Susan Sarandon Admits She Unexpectedly Got Pregnant During A Fling With A Man She Hardly Knew