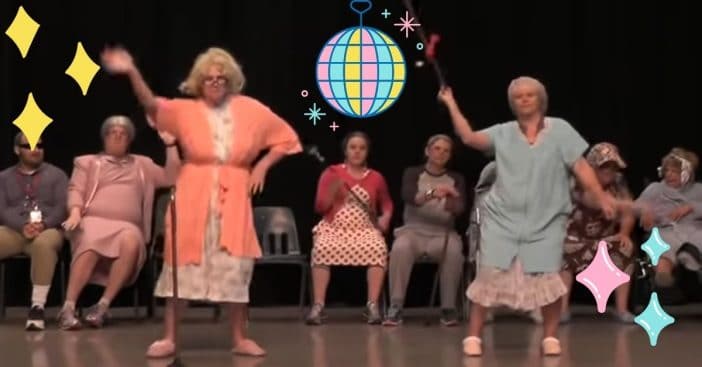 A group of high schoolers took the title “seniors” to all-new levels. Talent shows often inspire unique expressions of creativity – and open, unabashed hilarity. On occasions like these, the more the audience laughs, the better a participant is doing. Well, this dance routine by a group of teens certainly accomplished that.

Posted four years ago under the title Dancing Grannies, this performance sees some high schoolers giving everyone a great big laugh. Perhaps the biggest draw is how literally timeless their routine is. It has fun with all sorts of tropes, allowing them to be very expressive at the end of the day.

When you imagine grandparents dancing, what do you picture? What music would get them into the rhythm? Flo Rida’s song “Low,” popularized by Step Up 2 might not make the soundtrack. But for these high school “seniors,” it became a natural pick.

However, when they come out dressed as grandparents, the picture becomes mismatched. Wearing gray wigs, the group gets in a line and prepares to dance. The fake elderly citizens do their best, dancing in styles popular during their youth and today. Unfortunately, they have a limited range of movement. So, some moves are beyond them or leave them stuck.

Maximize what is available

A little under three minutes in and a duo has to pull off some fast moves that see them spinning, gyrating, and mirroring each other’s moves. Unfortunately, the routine proves slightly easier for some than others. The woman on the left can essentially make two rotations before the gentleman on the right can make one, all the while doubled over.

That’s not to say she isn’t having a hard time, too. However, not everything relies on this slow-paced approach. Later, one high school “senior” can actually move around pretty well. She hops, crouches, and waves her arm. The comedy comes because the troupe established all the others as being slow, but this other elderly woman can pull off a lot of moves. Meanwhile, she’s donned in a flowery nightgown that doesn’t look suitable for high-paced dancing. Get a good chuckle with the video below.