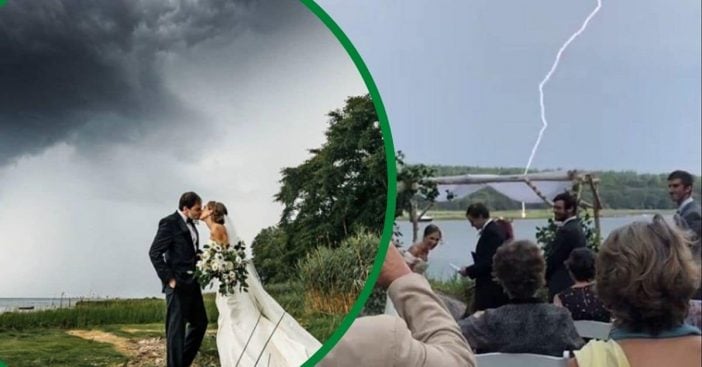 Groom Aaron Sawitsky joked about 2020 not being the best year as lightning struck down at their wedding ceremony. He and his new wife, Denice, were literally in the middle of tying the knot when a bolt of lightning struck down over their waterfront ceremony along with some clashes of thunder. The whole moment was recorded on video and it’s pretty chilling yet fitting for this whole year.

“Let’s face it, 2020 has not been the best year,” Aaron jokes before the lightning strikes. Pretty much every single person there was shocked at the irony of it all, including Denice. Aaron went and posted the video to Instagram, saying, “Mother nature has one wry sense of humor. Thankfully no one got electrocuted and we finished our vows before the rain started!”

The groom speaks to various media outlets, explaining that they were supposed to get married in June. However, due to the pandemic, they’ve had to reschedule four different times. “When we rescheduled it we said, ‘No matter what happens we are getting married Aug. 22,'” Denice tells WHDH. “That was an important part. No matter what happens, it might just be the two of us but we’re getting married that day.”

“As we were getting ready, we could start hearing thunderstorms in the distance and that was unsettling,” Aaron recalls. The ceremony was filled with 36 guests consisting of close friends and family. “It was also very surprising because there was nothing in the weather forecast — like on any forecast,” Denice adds.

“The timing was pretty epic”

While things didn’t go exactly accordingly to plan, again, it was definitely some quality amusement for everyone there. Even Aaron can be seen in the video shrugging as if to say, “Well, there you have it. 2020, everyone.” Very relatable. “The timing was pretty epic,” he says.