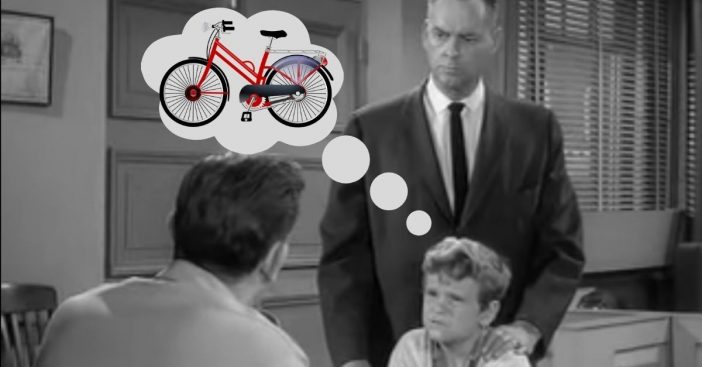 Some elements of society became completely unrecognizable now compared to decades ago. At the end of the day, usually (hopefully), parents want to raise good kids, though. If that is the case, then the Andy Griffith show has a helpful, timeless clip.

In that clip resides important advice on what to do… and what not to do as a parent. Anyone who values hard work, persistence, and strength wants their kids to bear those traits. They also want to help their kids avoid the exact opposite of those values. The Andy Griffith episode highlights how important these things are.

Everyone should learn important parenting lessons from ‘The Andy Griffith Show’

“Kids aren’t supposed to work for their allowance,” Opie’s friend Arnold explained sagely, despite being just a kid himself. Opie had just seen Arnold’s new bike and noted how much work must have gone into saving an allowance to buy it. Unfortunately, Opie takes Arnold’s dismissal of work as the rule of law. He also bestows upon Opie a lesson on how to throw a tantrum.

With this new knowledge in mind, Opie sets off on his own mission. He doesn’t see Arnold disregard a deputy’s reprimands for driving on the sidewalk. He also doesn’t see Arnold defy instructions immediately – and nearly run someone over after. Instead, he tries to get his dad on the same page about allowances not requiring actual work. When this earns him laughter from his father, Opie executes a patented Arnold Temper Tantrum, recruiting the floor as his stage to roll around on. His dad offers advice of his own: don’t get the clothes dirty.

Opposites collide when Arnold and his father arrive at Opie’s father’s office, where they came to complain to him, an officer, about Arnold losing the bike. Arnold immediately launches into his temper tantrum hoping to make his own dad yield and to sit in jail just so Arnold can get his bike back. Here, Arnold’s dad opens his eyes, and so does someone else. Opie sees this behavior play out and his father gets to show his son the dynamics at play between the two. Ultimately, Opie completely turns his attitude around, having learned an important lesson that day.

Opie’s dad knew it all along

The episode in question, depicting “Opie and the Spoiled Kid,” shows a lot in a short time. It perfectly showcases how unproductive tantrums can be and the importance of standing firm. Even Opie also gets to see how off the dynamics between Arnold and Arnold’s dad look. Arnold would let his dad sit in jail just for a bike? No bicycle is worth all that, not even a Raleigh Chopper bike.

All this can be traced, in part, to Arnold’s refusal to work for his prizes. Opie sees the value, now, in earning the good things in life. Meanwhile, Arnold wanted his dad to take a hit for him for a bike he simply got without working for it. And when he did get it, he abused it and utilized it as a means to cause trouble. When Opie gets one, through hard work and maturity, he will have deserved it, even a really nice one like a Schwinn Stingray.