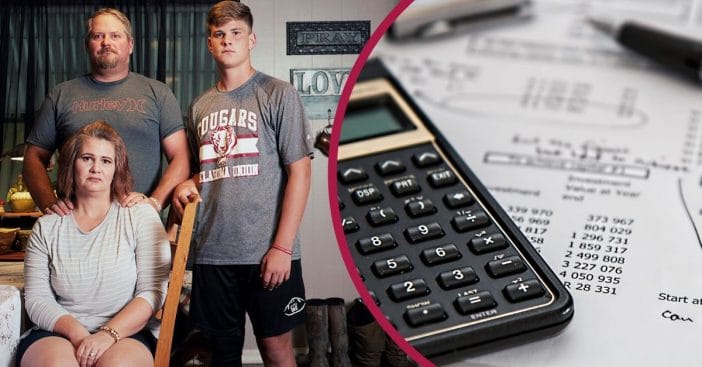 Tres Biggs is unfortunately in jail due to the medical debt over his son’s leukemia treatments and his wife’s seizures. His wife, Heather, and their son, Lane, simply needed medical care and had no idea it would amount to this. It was just a few years ago when this all started because Lane was diagnosed with leukemia. At the same time, Heather had developed seizures from Lyme Disease. As a result, the medical cost was completely unaffordable for them. They didn’t make enough to qualify for health insurance but made too much to qualify for Medicaid.

“We had so many multiple health issues in our family at the same time, it put us in a bracket that made insurance unattainable,” Heather tells CBS News. “It made no sense. We would’ve had to have not eaten, not had a home.” At the time, Tres was working two jobs in their hometown, Coffeyville, Kansas. The debt in total hit around $70,000 and the money he made still wasn’t enough to pay it. After missing a court appearance for his unpaid bills and unable to get the $500 for his bail, he was sent to jail.

“You wouldn’t think you’d go to jail over a medical bill,” Tres opens up about the scary situation. “[It was] scary. I was scared to death, because, you know, I’m a country kid. I had to strip down, get hosed and put a jumpsuit on.” According to reports, Coffeyville is one of the places where attorneys take advantage of accumulating medical debts. This is especially because their hometown is filled with low-income households.

RELATED: Kansas Cowboy Dying Of Cancer Gets To See His Horse One Last Time

One lawyer, Michael Hassenplug, pushed for a new law with the local judge. It requires those with unpaid medical bills to appear in court every three months and claim that they are too poor to afford their bills. If they miss two of those court appearances, an arrest warrant goes out for them with $500 bail. “I’m just doing my job,” Hassenplug says. “They want the money collected, and I’m trying to do my job as best I can by following the law.”

Any money collected means a big payday for Hassenplug and people like him. He’s known as the most notorious debt collector in town. So much that 90 people had been summoned over unpaid bills in a town of 9,000 in just one day. “I get paid on what’s collected,” he explains. “If the bail money’s applied to the judgement, I get a portion of that.”

As a result of all this, the Biggs don’t believe that jail is the right answer as they are doing everything they can to pay off their remaining debts.