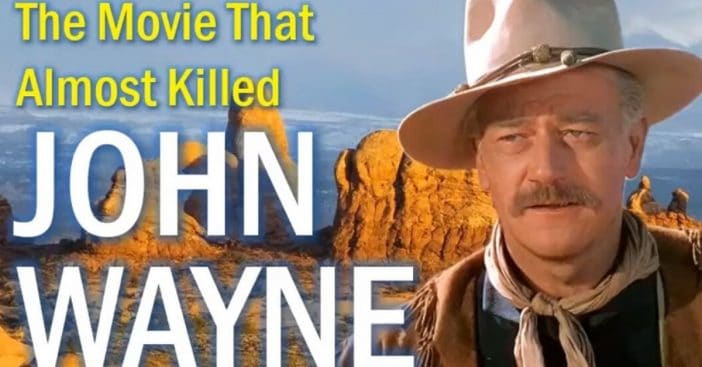 Sometimes even heroes need to be saved. Case in point, John Wayne nearly met his maker during the production of John Ford’s She Wore a Yellow Ribbon.

For those who aren’t familiar with this film, She Wore a Yellow Ribbon was released in 1949 and was the second of Ford‘s Cavalry trilogy films, along with Fort Apache (1948) and Rio Grande (1950). At the time, the movie’s budget of $1.6 million made it one of the most expensive Westerns ever made.

The story of how John Wayne almost died while filming

Co-starring along with John Wayne was Joanne Dru. Before she wore a yellow ribbon, Dru had made a splash in Howard Hawks’ Red River. Over the course of the next couple of decades, Dru had found steady work. Of course, it’s possible that her brother might be more recognizable to you. Dru’s brother is the one and only Peter Marshall, the original host of one of the greatest and funniest games ever, Hollywood Squares.

So, here’s what happened. Wayne was shooting a scene where he was supposed to wave his coat around to start a horse stampede. After successfully coaxing the horses, the Duke’s own horse suddenly panicked and threw him to the ground.

Wayne hit the hard dirt with such tremendous force that he was knocked unconscious and, to the horror of the production crew, he was right in the path of 50 stampeding horses!

What Bravery! He was saved by a Crew Member

Can you imagine that? At the time, Wayne was arguably one of Hollywood’s biggest stars and there were fifty horses racing directly toward him. Everyone on-set that day thought that John Wayne was going to be trampled to death. However, at the last minute, a quick-thinking wrangler on the crew selflessly jumped in front of Wayne. He managed to get the horses to run around him.

When Wayne finally regained consciousness he was horrified to discover how close he had come to meet his maker. He was ever so grateful to the courageous young man who threw caution out the window and raced to his aid.

Wayne always felt that he had been lucky to be the lead in She Wore a Yellow Ribbon. It was a role that John Ford had originally felt would be better off played by someone else. However, when the movie was completed, both Wayne and Ford were extremely proud of the resulting picture and Wayne’s performance.

Ten years after making She Wore a Yellow Ribbon, while on location filming The Barbarian and The Geisha, Wayne’s house in California caught fire and burned to the ground. Sadly, destroyed in the fire was his treasured collection of memorabilia from many of the movies that he had been in for the past three decades. Interestingly enough, the only thing that was able to be saved from the fire was the hat that he wore in She Wore a Yellow Ribbon.

Click for next Article
Previous article: The Inspiration Behind “You’re So Vain” Remains A Mystery To This Day
Next Post: Melissa Gilbert Reflects On Lessons She Learned From ‘Little House On The Prairie’