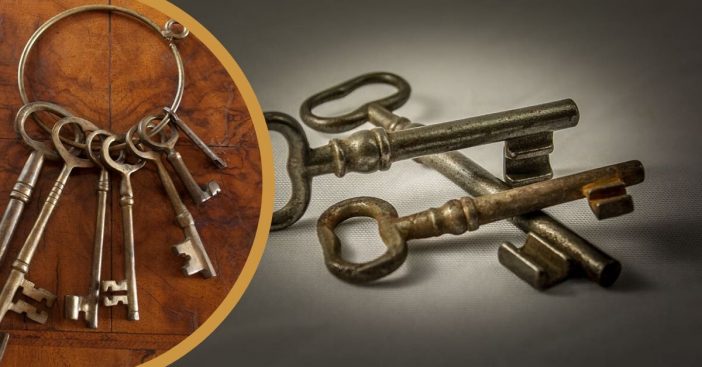 Keys can unlock literal physical doors. But they can also throw open a portal to another time. These simple tools have a history that sweeps back thousands of years. Remarkably, though, only recently did we see a particularly major shift in their appearance. And functionality. Did you have one of the more traditional keys that actually unlocked stuff around your house?

Today, structures that use keys usually utilize flat, small bits of metal that act as keys. But with the advent of the digital age, even that has changed. Keys as we remotely knew them have become…remotes. Apps added to phones. Which do you have and use?

Unlock the past with this history of keys

Around 600 BC, the Assyrians had a successful mechanism for locking their doors. Pins and tumblers kept a sturdy bolt in place and when those moved, so could the bolt, allowing the door to open. In those times, as Infographic Journal tells it, they used wood with specially-placed prongs that would lift the pins. By 100-200 AD, the Romans utilized this same tool but replaced all wood with metal to maximize the key’s strength.

RELATED: Conversation Pits Of The 1970s Are Making A Comeback

Medieval Europeans used the same exact system – with a twist. This is when we see items getting pretty. This era brought on the birth of decorative keys, made fancy on both ends. Though, traditionally, they emphasized beauty on the end that gets held to turn the key, rather than the part that moves the pins. However, overall, the entire key became as decorative as it was functional. After making this tool a piece of art, engineers then focused on making the lock system more effective as a whole. Wanders and thieves alike wanted to bypass locks without a key, so engineers worked to make a system that couldn’t be so easily defeated.

Modern locks stuck to their roots from way back with the ancient Assyrians. But the system is most similar to what’s called the Yale System. Even this, though, is dwindling fast. Those who have keys are most familiar with the flattened models that look almost like jagged blades. But even those now are yielding to the digital age.

Keypads, cards, and apps replace old-fashioned, artful keys in increasing numbers over the years. The way we secure our homes and possessions constantly evolves. Not everyone has followed along, though, and instead hold dear to these reliable pieces of decorative, useful metal. When asked on Facebook, “Have you ever seen one of these keys?” people have not only seen them, they still have and use them! “Absolutely. Loved them,” writes one user. Another replied, “There in my interior doors as we speak.” They brought to mind memories of skeleton keys used all around the house. Do you still have or use them?