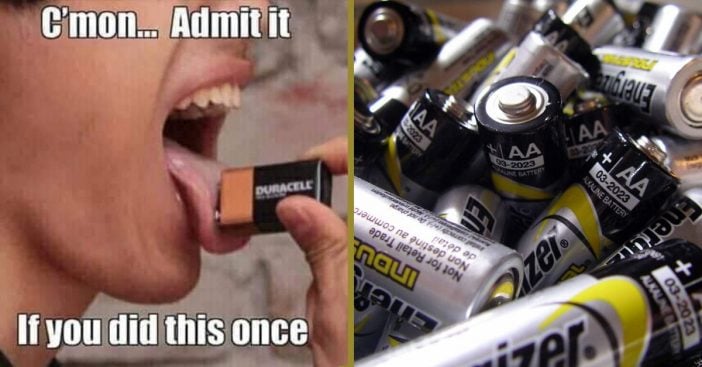 You may or may not have, but a lot of people have licked a battery at least once in their lives. Probably more people than you’d consider! According to Seeker.com, “You can lick a big honking D battery until your tongue is dry. Not much will happen. But if you lick a rectangular 9-volt battery, touching both the positive and negative terminals, you will receive a small electric shock.”

Definitely might’ve been a cool and silly way for a kid to endure that “small electric shock” sensation. Seeker adds, “Truth be told, it’s not really bad for you, just mildly alarming and unpleasant.” Some people may have done it for a buzzing feeling, but some people have also said it’s how they “check” batteries to see if they’re still good or if they have expired!

Did you ever lick a battery back in the day? Survey says…

In our DYR 1970s Facebook group, our members were asked if they had ever licked a battery before. A surprising amount of people responded “no,” but there were definitely quite a few who remember doing this or still do!

RELATED: Here’s A Nifty Trick To Tell You If A Battery Is Dead In Just Seconds

“Quite a few times. To get a charge in the morning,” one person jokes.

Another says, “Always, only way to check for shelf life.”

“The only battery you can check if it’s good or dead just by touching it to your tongue.”

“How else do you know if it still got any juice?”

So, did you ever lick a battery as a kid or still do? Turns out that a lot of people still do by the results of the question above. There’s also a video from 2019, showcasing a competition on who can keep licking a 9V battery the longest. As stated in the video, do not try this at home! Unless you already have, of course. In that case, carry on.

Click for next Article
Previous article: Do You Remember Playing With Old Maid Cards, A Timeless Classic?
Next Post: Breaking: John Travolta’s Wife Kelly Preston Dies At 57 Of Breast Cancer