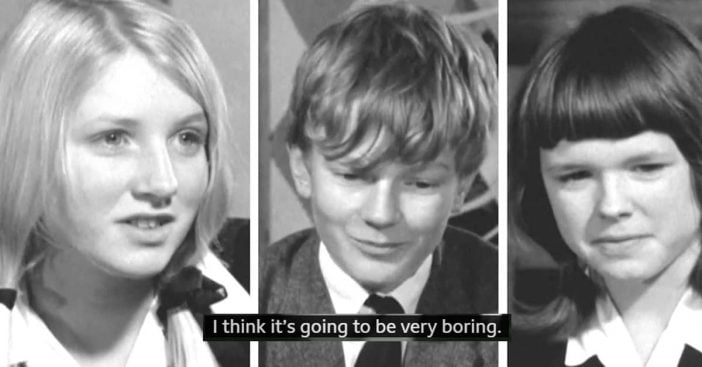 Shows, movies, and books from decades ago give a perfect look at where we expected to be by now. Looking at literature like The Time Machine, humanity is very behind on mastering temporal travel. Some old theories can be pretty wild and, unfortunately, unlikely for any time soon. But others can feel almost alarmingly accurate. In the video below, children from the 1960s muse over the possibilities in store for the year 2000. Their predictions are worth hearing.

On the one hand, some of their speculations could happen. One boy contemplates supernovas and grand cosmic events. But other predictions can be found in circulation right now. We’re not pretty far from having a “cabbage pill,” are we? Some predictions feel particularly relevant in the time of the pandemic, but hopefully, these astute kids are now adults working to help what they so accurately imagined.

One observant young boy saw great unemployment in store for the year 2000. He’s not just an economist, though. He’s actually a biologist, and that part of him quickly took control to discuss overpopulation and how he’d like to “temper it.” Overcrowding comes up in various pieces of media from time to time. It was the driving force behind Dan Brown’s Inferno, when an…enthusiastic…scientist wants to stop humanity’s exponential growth.

RELATED: A Live Action Version Of The Jetsons Is In The Works

The little girl in the conversation had some grim predictions as well. She anticipated 2000 would not be “so nice. Sort of, all machines everywhere.” This, in turn, would lead to boredom that would be anything but nice, as machines do everything for others. Quite a few participants shared an intense wariness towards machinery and computers and feared everything becoming uniform and uninteresting.

These kids aren’t afraid to get very real

If you thought these children from the 1960s had fun, exciting predictions for the year 2000, prepare to be mistaken. A little whimsy would break up these grim predictions nicely, but instead, one boy is certain the wrong person will get an atomic bomb and level the entire world.

That’s a far cry from what TV shows like The Jetsons or Star Trek anticipate for our future. Indeed, Star Trek became famous for having such a proudly international crew. However, one girl did not see togetherness. Instead, she anticipated all-out war. “The more people who get it…somebody’s going to use it someday,” she predicted. These kids had a lot of thoughts on the year 2000 from their spot in the 1960s. Hear them all for yourself in the video below. What did you imagine later decades would have? What do you anticipate for the world 40 years from now?

Click for next Article
Previous article: William Shatner Shares Hilarious Response To Female Captain Kirk
Next Post: How The 1975 ‘Jaws’ Film Became A Thriller Classic That Still Stands The Test Of Time