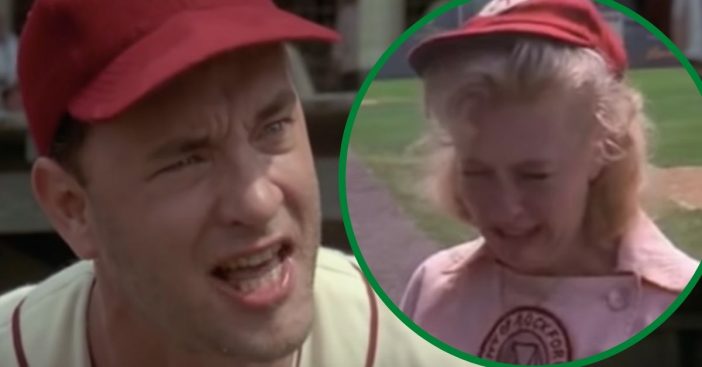 There’s a lot of iconic lines from movie’s past, but there’s just something about that one line in 1992’s A League of Their Own. Of course, the line comes from Tom Hanks’ character, can you guess what it is? That’s right: “There’s no crying in baseball.” And that line alone may have just become the best line out of a baseball movie in the history of baseball movies.

The film is about the All-American Girls Professional Baseball League and Hanks’ character, Jimmy Dugan, is the manager of the Rockford Peaches. Alongside Bitty Schram’s character, Evelyn Gardner, the two make for a very memorable scene. Her character throws to the wrong base and costs the Peaches the lead. Dugan waits until Gardner comes back to the dugout to lay into her about what she did when he sees that she’s crying. This prompts the iconic line.

The most iconic line in ‘A League of Their Own’

Contributor Mike Lupica of MLB News actually managed to get ahold of Hanks amid the whole coronavirus situation. He asked Hanks about the legendary movie line. “‘No crying in baseball’ never scored much in the read-throughs of the screenplay,” Hanks responds. “But then the read-throughs had so many other questions for Penny [Marshall, director] to sift through that the lines were just lines, the jokes were just jokes, and everyone on the Peaches [was] looking to score a laugh, a beat, a moment, anything.”

“When we shot it, Bitty Schram dissolving into tears and humiliation gave me the go ahead to be DEFCON 5 with outrage — and just keep going. That Penny used it all was the wonder of it. The actual dialogue has some jokes in it that didn’t matter, as it was Jimmy’s boiling rage at the idea of crying in baseball that carried the day and the scene, making it worthy of Jumbotron clip packages at ballgames.”

A specific strategy for making a memorable film

Hanks wraps it up, “The sublime laugh comes later in the movie when Bitty makes another mistake and Jimmy goes into a paroxysm making sure he doesn’t scream at her again. Penny loved that stuff.”

Sounds like the late Penny Marshall had a great strategy for Hanks’ acting abilities throughout the film! This is what makes it such a great and enticing watch. In conclusion, watch the full scene below! Do you remember seeing it for the first time?

Click for next Article
Previous article: People Are Using Whatever They Can As Protective Gear While Out In Public
Next Post: Freddie Mercury’s Final Letter To Elton John Brought Him To Tears