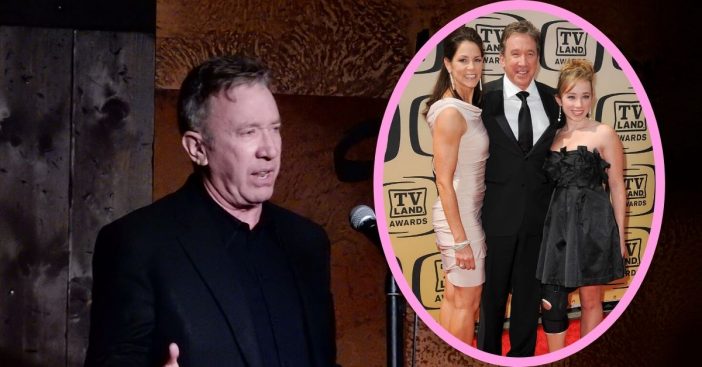 Couples face all sorts of bumps in the road of their relationship. But when they overcome those challenges together, they end up inspiring others. The relationship between Tim Allen and Jane Hajduk represents personal growth at an individual level and as a couple. Both are still in love and boast the strongest relationship of any Allen has had off and on our screens.

From the get-go, this couple sought to do everything right. That radiated to their wedding plans to, on a small but important scale, Tim Allen’s lifestyle changes. Hajduk’s role in his personal improvement cannot be overstated, nor can his dedication to betterment. Again, there have been bumps along the way. But theirs is definitely a relationship and family worth exploring.

Tim Allen got with Jane Hajduk after a tumultuous time

Though he’s known as a family man because of Home Improvement, Tim Allen had some very harmful habits. At first, he married Laura Deibel, his college sweetheart, in 1984. They spent 15 years together before separating. Allen spoke to The Detroit News about the event and puts the responsibility on himself. He focused on his career while also falling into substance abuse. As a result, he said he “let [his] family slide.”

RELATED: The Truth Behind The Recasting Of Jill On ‘Home Improvement’

Allen and Deibel legally separated by 1999. In 1998, Allen had to check himself into rehab for alcohol abuse. He got into trouble with the law because of his damaging habits. He further revealed what a different man he was when abusing alcohol. “I’m not the same guy I was the first time [I was married], when I was hiding and doing what people who drink too much do. I was not connecting,” he admitted. “But I’ve been sober for almost 20 years. I’m much more present.”

All their choices revolve around being a family

After separating from Deibel and alcohol, Tim Allen started seeing Jane Hajduk. The two dated for five years before enjoying an intimate wedding ceremony in 2006. On October 7, they tied the knot at a small, charming venue in Grand Lake, Colorado. Only family members attended, including Allen’s teenage daughter from his past relationship, Katherine. Three years later, Elizabeth joined the family as the first daughter between Allen and Hajduk.

The couple carefully balances work and personal matters so both can mingle without one area getting shut out. Both are involved in acting and have appeared in the same movies together. Allen uses his work to reflect the love he has for his family. He connects with his character on Last Man Standing for being a family man with a spouse he as a rich and real relationship with as well as kids to look after. He seeks to do right what he got wrong the first time. “I was gone so much in my first marriage, I love the moments when I engage with my youngest daughter now,” he explained.

Click for next Article
Previous article: Wise Words From Dean Martin And Frank Sinatra: You Either Have Style Or Don’t
Next Post: WATCH: Judy Garland And Barbra Streisand Sing Beautiful Duet Together In 1963