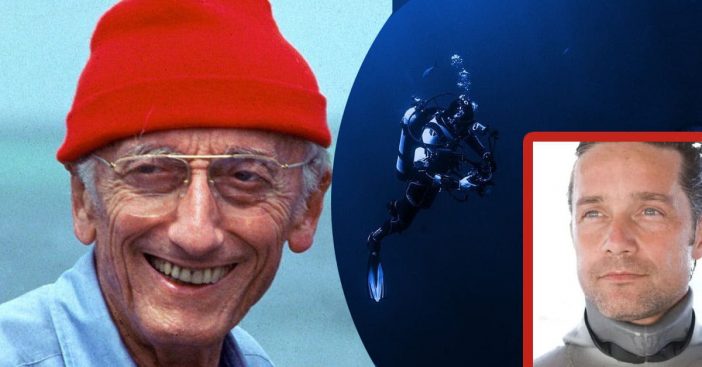 Jacques Cousteau build a name for himself for the benefit of others. To do this, he became a celebrated and respected explorer, conservationist, documentarian, author, researcher, and more. When he passed away in 1997, the world mourned a revolutionary, hardworking, compassionate man. Now, though, his grandson Fabien Cousteau wants to continue his legacy.

But, all the while, he’s putting his own spin on things. That makes sense, though, considering he and his grandfather lived in different times and completely different worlds. Fabien must address new hurdles that had not even been conceived yet when his grandfather lived. But Jacques Cousteau’s years in action had their own limitations too. Now, Fabien must bridge the gap and instill a sense of wonder and thirst for knowledge in generations that have seen too much they want to tune out.

Fabien Cousteau grew up with a sense of wonder

What do Jacques Cousteau and Tintin comics have in common? Both unfailingly instilled a sense of wonder and a thirst for adventure. With this in mind, Fabien Cousteau, who grew up with both, was destined to thirst for knowledge of the wider world. In an interview on Quartz, Fabien explained how these two forces sparked his enthusiasm. “What kid doesn’t love cartoons?” he reasoned. “They take you into these magical places and possibilities.”

But some were more effective than others. “Tintin happened to be a little bit more realistic and a little closer to home. He was a young boy with a dog going on these crazy adventures, and I’ve always loved animals. I grew up with animals at home—hamsters and cats and dogs—so for me, I could relate. He went to the Moon and to the bottom of the ocean and to the top of Tibet, just amazing stuff. Being able to take my dog in a shark-shaped submarine? That’s so cool! As a seven, eight-year-old kid, it always made me think, ‘Ah, this is so cool. Why aren’t we doing more of this?’ Like, I want to do that!”

How to inspire others to have the same spark for discovery?

Had the honor of interviewing underwater explorer @FCousteau, grandson of Jacques Cousteau. We talked about TinTin and the ISS and sustainability and other important things, but for now, I just thought everyone would like to see his ocotopus socks. #glexsummit pic.twitter.com/vOGFff9vpR

As Georgia Frances King pointed out on Quartz, opinions have changed on a lot of topics over the years. Today, people grow excited at the chance to stay inside. That is something Fabien cannot relate to but wants to offset. “I hated being in a box. Young people nowadays are more distracted than ever. I’m all for teaching technology—absolutely—and using it the right ways. But as much as I love technology, there is nothing better than to take a walk in the woods or to take a plunge into a beautiful cenote or going out into the sea and seeing the fireworks display of life,” he asserted.

If nothing else, he wants people to realize, “Life is continuing right outside your window. You can be part of it now, or you can miss it.” He thinks technology and mobile devices should be marketed differently, that already they did a disservice by not showing them in a certain light. These devices should be promoted for their ability to help us discover and making discovery more convenient. And, when using those devices, Fabien wants people to actually take action. He implores, “Go do something. Doing something is much more important than being famous.”