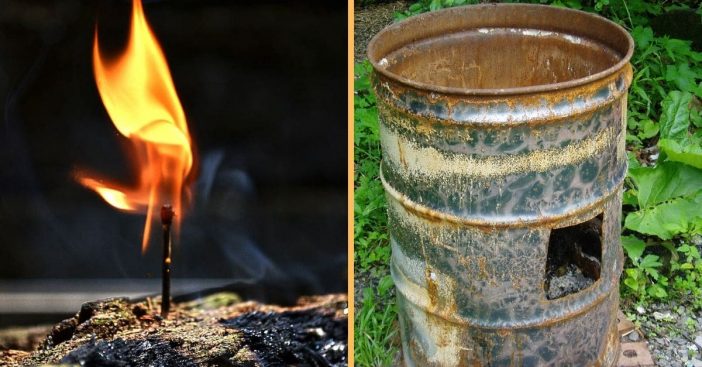 Picture it: a steel 55-US-gallon spewing smoke through a grate at the top. For some, this might conjure up the image of a familiar and dangerous sight: a burn barrel. Burn barrels were part of a larger incineration practice around America and some of Europe. For a time, people used this as a go-to for waste disposal and heat at once. But that habit gradually died out…and for good reason.

In the grander history and scheme of developing incineration methods, burn barrels offered relatively more safety. Relatively. The drum shape and grated top helped control the spread of fire and embers. But the human body and surrounding environment still suffered risks, both immediate and gradual. Revisit this old practice – from a safe distance – here.

What drew people to use a burn barrel?

One method of waste treatment came to include the burn barrel. It falls under the larger umbrella of incineration, which allowed for burning organic materials found in waste. There are a lot of different ways of using incineration to destroy waste, but the burn barrel got a pretty solid following for a while. Control drew people in. Burn barrels offered a set shape and relatively closed environment to light things up. The metal nature of the barrel allowed it to see a few reuses before it oxidized and rusted.

The design itself was, ultimately, pretty practical. Anything burned could not pop off anywhere and fire could not easily spread. Instead, destroyed material simply sank to the bottom of the barrel. Because of this device’s shape, incineration could, in theory, take place on a windy day without a big fear of fires spreading. All the while, even with stable conditions, the top grate alleviated any other fears that embers might naturally spread.

Today, don’t expect to see as many of these

Now, there are a lot of logistics behind debating the pros and cons of burn barrels. For one thing, different materials burn in different ways. Some can be “clean,” while others can give off thick smoke and even horrible fumes. Additionally, Outdoor News writes that the EPA looked into how much pollution these give off. Their findings reportedly indicate that one burn barrel could produce as much pollution as a municipal-level waste combustor destroying 200 tons a day.

Pollution presents a gradual but sobering effect caused by burn barrels. But they can also have immediate and eventual effects on the body, too. Smokers can have heightened risks for heart problems; being around a burning barrel can cause a similar problem. Children, the elderly, and pregnant women can also be harmed by dioxins. These groups can face reproductive, developmental, and immune-deficiency problems. Legislation has fluctuated over the years, but at the end of the day, personal health should always take priority. Though, as you can see in the video, spectacle sometimes wins out.

Click for next Article
Previous article: Man Starts A YouTube Channel For People Who Grew Up Without A Dad To Teach Them Basic Skills
Next Post: Nancy Reagan And Mr. T Actually Shared A Strong Friendship