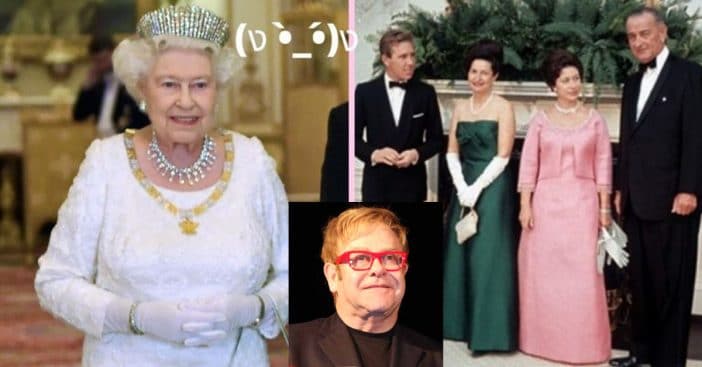 Hell hath no fury like the Queen of England scorned. In his new memoir, Me, Elton John revealed just how tense things could get among the British Royal Family. While the title of queen is, to an extent, that of a ceremonial figurehead, Queen Elizabeth is unafraid to use to her benefit. John recalled one particular incident when she slapped her nephew, David Armstrong-Jones, because he was not listening to her.

It all took place at a party. In attendance was the matriarch herself and her sister Margaret. Additionally, Margaret’s son David and daughter Lady Sarah also attended. The queen issued directions for the man but they went disregarded. Things then came to blows – but in a surprisingly lighthearted way!

Elton John’s memoir, Me, released on October 15, 2019. Reviews comment on the insightful, wild stories and the unabashed jokes that often target John himself. The book alleges a near-fight between Sylvester Stallone and Richard Gere over Princess Diana. But that was not the only fight it outlines within its pages.

Royalty gathered around for a night of festivities. The queen’s sister came with her son and daughter, and it was the son, David Armstrong-Jones, who became the latest target of the queen’s ire. According to John’s book, the queen told David to check on his sister. But David tried to dodge the task. John writes, “When he [Linley] repeatedly tried to fob her off, the Queen lightly slapped him across the face, saying ‘Don’t’ — slap — ‘argue’ — slap — ‘with’ — slap — ‘me’ — slap — ‘I’ — slap — ‘am’ — slap — ‘THE QUEEN!’”

Queens want to have fun too

The memoir continues to reveal that Queen Elizabeth then saw John witness the lighthearted display. In response, she outright winked at him. The singer then admitted, “I know the Queen’s public image isn’t exactly one of wild frivolity, but…in private she could be hilarious.”

Indeed, the image surrounding Queen Elizabeth II is a many-faceted one. She is viewed as everything from an out-of-touch granny to a stern matriarch and to a privately loving woman. Ultimately, all and more can be true at once. She has given people reason to chuckle the first time she used a self-checkout machine. This same woman who did not know how to navigate this machine did know what to say to a worried world amidst the coronavirus pandemic. The tabloids relish signs of in-fighting and disapproval from her yet she called for national and international unity. But, even then, family members did splinter from the alien lifestyle the royals maintain. At the end of the day, though, there will always be something interesting to see from her.