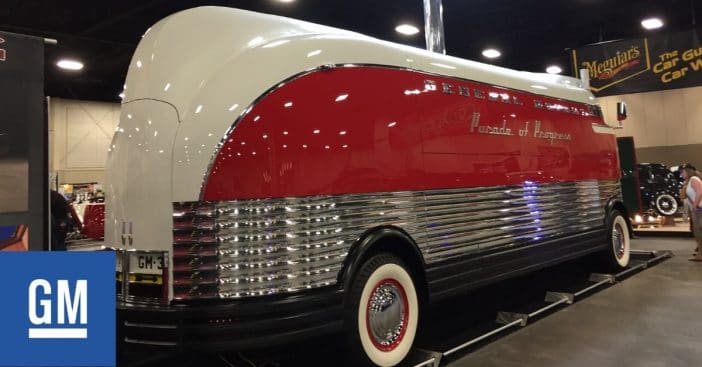 Don Mayton and Jim Gentzel have an important message for you. Mayton is the Futurliner restoration project director. Gentzel is a Parade of Progress staff member. Both are very passionate about the GM Futurliner No. 10. And there’s a pretty solid historical basis for their passion. You see, this Futurliner was the first truck documented by the Historic Vehicle Association to be included in the National Historic Vehicle Register. Also, that very same registry resides in the Library of Congress.

First, the two emphasize this truck’s importance as a testament to the country’s past and future. At the time, this truck represented a lot. During its big release, the truck offered drivers a look at all the potential the future held. Even though it’s been ages, the truck is still important. Explore its history to see why.

The GM Futurliner No. 10 was a truck of the past that promised the future

The GM Futurliner No. 10 is nationally significant. It has had to pass three criteria. One reason actually ties into one of its biggest draws. First, it appeared in the “Parade of Progress.” General Motors Corporation manned this “mobile science and technology exhibition,” as the Historic Vehicle Association (HVA) writes. Actually, the GM Futurliner was one of only 12 used during 1941, 1953, and 1956. 11 million people across 200 cities in America witnessed this testament to the future.

Involvement in the Parade of Progress continues to drive some of the biggest, important features of this truck. For instance, VHA points out that GM custom-built this Futurliner for the Parade of Progress. And, naturally, it was also a product of the time. Everyone contemplated humanity’s potential, especially regarding flight. So, this grounded truck included space-themed elements in its design.

Look at the Futurliner for a time machine to the past

Thirdly, the HVA cites the GM Futurliner’s informative qualities. Only nine vehicles, including the Futurliner, remain from that era to provide insight into this iconic line. And this particular one was fully restored to exactly how it would be in 1953 and 1956.

Information did not spread quite as easily, rapidly, or universally in the ’40s and ’50s compared to today. Without social media, those with the same passions as Mayton and Gentzel had limited options for getting others excited about mankind’s progress. But they would have wanted to “get the word out.” The GM Futurliner No. 10 spread the word in big bold letters, bright colors, and sleek designs. This truck meant so much decades ago. But it still means a lot now. Hear their words and revisit this important testament to human potential and enthusiasm.

Click for next Article
Previous article: Breaking: R&B Singer Betty Wright Dies At 66
Next Post: How Archie Bunker Forced People To Look Inside Themselves And Shape Up