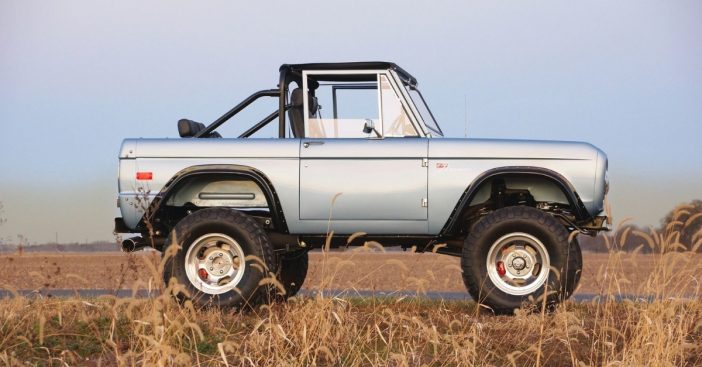 The Ford Bronco is a line of SUVs that were made by Ford from 1965 to 1996. It was a large off-road SUV that kind of looked like a Jeep and a truck combined. The memory may conjure up images of a Ford Bronco you owned or the infamous O.J. Simpson police chase when Simpson was driving a Bronco.

One company called Gateway Bronco located in Illinois is aiming to bring the Ford Broncos back to life. Gateway Bronco aims to find, restore and even build first-generation Broncos, but with all of the safety and special features modern day has to offer. Picture this: the look of that vintage Bronco you love so much but completely updated so you feel safer.

Gateway Bronco is a small business. They employ only 18 people in a 60,000 square-foot factory. Each truck is built on a modern assembly line, which they say is in the spirit of Henry Ford and the good ‘ole days. They even got the blessing from Ford Motor Co. before starting to build these Broncos.

The Broncos Available For Purchase

There are three different models available for purchase: the Fuelie, the Coyote Edition, and the Modern Day Warrior. They are also built in different ways. You can either purchase one that has been found and restored, buy a Bronco with an original frame but new body, or a Bronco built from the ground up. These are basically new but still look “old”. It looks like the pricing starts at $95,000.

The founder of Gateway Bronco, Seth Burgett, has had a love for old Fords since he was a kid. According to Gateway’s website, “Seth Burgett has been consistently involved in production during his career, starting in low volume military aircraft and medical devices to high volume automotive and consumer electronics. By combining his production background with his lifelong car knowledge and passion, he’s changing the way trucks are being restored and now building modernized Early Broncos the way Henry Ford envisioned – on a production line.”

He noticed the popularity of Ford Broncos, decades after they first came out and decided to capitalize on that. What do you think? Do you still love Ford Broncos or still own one? Or would you be interested in buying one from Gateway Broncos and having a nostalgic vehicle in your home?

If you enjoyed this article, please SHARE with all of the vintage car and Ford Bronco enthusiasts you know!

Watch that famous video of the O.J. Simpson police chase in his Ford Bronco again. Do you remember watching it live on television?