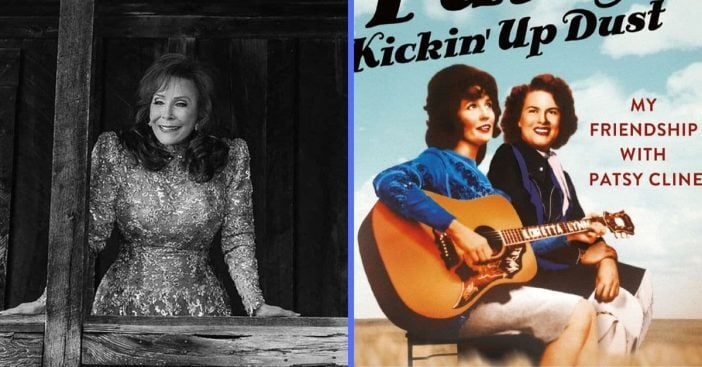 The coronavirus has prompted many Americans to stay at home. Certain demographics are especially susceptible to the virus. This includes country artist Loretta Lynn. Over the years and recent months, disasters hit her state and personal health. Quarantine ended up being something of the final straw. Confronted with isolation, Loretta Lynn has taken the time to reflect on her relationship with the legendary Patsy Cline.

Quarantine has proven to be an interesting time for Loretta Lynn, as she recalls having visits from Patsy Cline. These visions are meaningful for Loretta Lynn for one big reason. “She was my big sister,” Lynn stated. The two women showcased different styles but complimented each other. And their friendship is also visible through their music. During this uncertain time, Loretta Lynn has a lot to say about her relationship with Patsy Cline.

Some people stay with you even when not present. For Loretta Lynn, this is the case with her late, legendary friend, Patsy Cline. Both became celebrated country singers in their own rights. Though, Billboard points out that their styles differ slightly. Cline transcended the lines between country and pop, bringing in timely elements from other genres. Meanwhile, Lynn brings up important social issues and a hybrid language that had her singing, “I was borned a coal miner’s daughter.”

Lynn opens up fully in her book, Me & Patsy: Kickin’ Up Dust — My Friendship With Patsy Cline. Grand Central Publishing gives the world this book on April 7. Focusing on Cline, especially lately, makes a lot of sense since Cline was an older sister figure for Lynn in many ways. According to Billboard, Cline gave her stage clothing and important advice in equal measure. Her wisdom helped Lynn navigate contracts and confrontations with men acting inappropriately. Lynn attributes Cline with offering insight on vocal techniques and support when jealous female peers lashed out against her.

This was supposed to be their year

“She told me how to walk onstage, you know, and how to hold the mic,” Loretta Lynn recalled of Patsy Cline. She went on, “Low note; put the mic close. Whenever it’s going to be a high note, pull the mic away from my mouth, which helped me a lot.” Their support was, ultimately, a two-way street. “She told me I could be a better singer if I would. I told her she could, too.” And, this year, Lynn is celebrating her late idol, friend, sister in a few ways. Though, her way to honor Cline was supposed to be more involved. The coronavirus caused cancellations to her scheduled promos for the book outlining their relationship.

But even in quarantine, and even with Cline sadly departed, Lynn can still see her old friend. “I was singing one day, and I thought, ‘Geez, I wish Patsy was here,'” Lynn stated. So she wished it and so it was. “I looked up, and there she sat. Every time I’ve done that, she’s been with me. I see her a lot.” During these visits, Lynn sees her friend as she remembers her, not at all aged, garbed in a white blouse and red “stretchy pants.” And this vision of Cline offers some of the best words a friend can hear: “She just looks and smiles like, ‘You’re doing good, honey.'” It’s an important bit of reassurance, especially during this pandemic. Indeed, Lynn feels secure during it all, despite, at age 87, she’s in a susceptible demographic. She explained to Billboard, “I’ll be fine. I think they’ll let me out of this anytime, basically whenever the problem is over. Then we’ll talk again.”