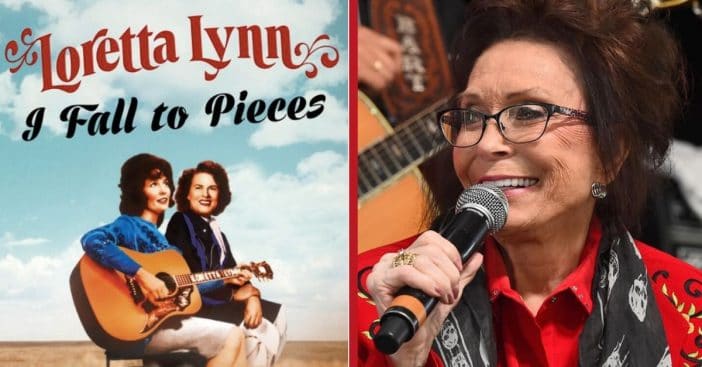 On April 3rd, Loretta Lynn released a newly-recorded cover of Patsy Cline’s hit “I Fall to Pieces.” The song was originally written by Hank Cochran and Harlan Howard and quickly became Patsy’s first No. 1 hit ever on the country charts in 1961. Prior to her tragic death, she had really made a name for herself in the music industry and took newcomer Loretta under her wing.

The new recording from Loretta comes in celebration of the upcoming book, Me & Patsy Kickin’ Up Dust (April 7). It was penned completely by Loretta and her daughter, Patsy Lynn Russell. A press release calls the upcoming book an “up-close-and-personal portrait of a friendship that defined a generation and changed country music indelibly–and a meditation on love, loss and legacy.”

Fans have been commenting on the song in YouTube’s comment section. One fan says, “Miss Loretta, you sound AMAZING! Can’t wait to read your new book about you and Patsy’s adventures together!” Another says, “Loretta I am literally crying….You were the person that introduced me to music. I love you so much maybe one day you can hit the road.”

Another fan leaves a lengthy, yet thought-provoking comment: “Wow. The Lady still has it. All singer’s voices change over time, and sometimes it’s not a pleasant change. But that’s not the case with Loretta. There seems to be a bit of a new pitch in Loretta’s voice that sounds great on this. It’d be hard to describe but it’s a kind of a melancholic, yet sweet sound. And I can already think of a lot of songs that she would sound great on. I say it’s time to come out with a new album, with the Queen putting her spin on some classics by other artists. I can see it now: Finally, the album we’ve all been waiting for all these years, Loretta Pulls Off Her Covers. Ha. Ok, that’s pretty tacky, but I bet Patsy would’ve grinned at it.”

Listen to the song below and let us know your thoughts on it!
Click for next Article