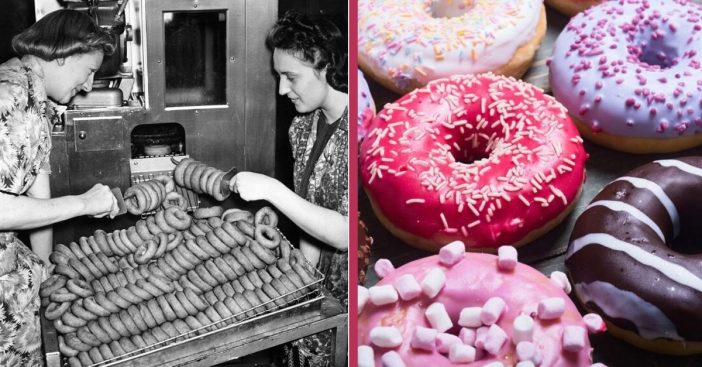 Doughnuts have been a beloved pastry all over the world. Places like Dunkin’ Donuts and Krispy Kreme have become the go-to places for doughnut lovers. But, have you ever wondered why there is a hole in the middle of a doughnut? While no one is quite sure when the first doughnut was invented, people have actually been frying dough for centuries now.

Archaeologists even found evidence of Native Americans making a fried pastry that is similar to doughnuts, but we probably wouldn’t recognize them in the modern era. The very first modern doughnuts were made by Dutch colonists in New Amsterdam (New York City). This was the 17th century, so they weren’t called doughnuts; they were called olykoeks, which translates to “oily cakes.”

Why do doughnuts have holes? The history behind it all…

These olykoeks actually didn’t have holes and actually looked like small pancakes with nuts and fruits. Yummy! While there are tons of theories surrounding the creation of the modern-day doughnut, there’s one popular theory, in particular. The theory stems from a ship captain from the 1800s named Hanson Gregory. His mother allegedly made the best deep-fried dough. For one of her son’s voyages, she made a huge batch of them using spices like nutmeg and cinnamon. She also put hazelnuts or walnuts in the center where the dough may not cook evenly.

Since they ended up being literally dough with nuts in the middle, she called them doughnuts. And, thus, the name was born! While Gregory’s mom might have coined the recipe herself, it’s Gregory himself who gets most of the credit for this theory. Another theory is that he added the hole in himself so he could skewer the treat on the wheel of his ship. Imagine that!

Transitioning to the modern-day era

It’s likely that the first theory about Gregory’s mom putting nuts in the middle is probably more likely. Early Dutch immigrants would make theirs the same way, putting fillings in the middle to prevent them from getting too doughy. Perhaps over time, the center would be eliminated for good, which would make sense why we have the hole in the middle now!

So, this leaves a lot of people wondering, what do you do with the extra dough that is punched out from the holes? Well, in 1972, an executive at Dunkin’ Donuts had an idea for this. They suggested using the extra dough to make a whole new treat. That treat is still beloved today, specifically at Dunkin’ Donuts locations every day; Munchkins! However, nowadays, there are automated doughnut-making machines that automatically make doughnuts into perfect rings, so there’s no need to use any ‘extra dough’ for the Munchkins. Amazing how we’ve evolved through the years!

What do you think about the fascinating history behind doughnuts? Check out the video below to learn more about its history.