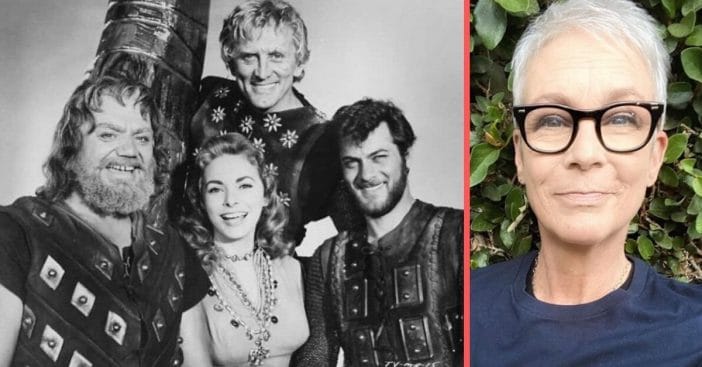 After the news that Kirk Douglas passed away, many celebrities are sharing their stories about the late actor. Actress Jamie Lee Curtis shared a beautiful tribute and thanked him for saving her life when she was a child. He saved her from drowning! Kirk starred in the film The Vikings with Jamie Lee’s parents Tony Curtis and Janet Leigh in 1958.

Jamie Lee shared some old family photos and thanked Kirk and his widow Anne. She wrote, “Kirk and Anne were important to BOTH my parents. Here in The Vikings with both Tony and Janet. I just remembered this morning that Kirk saved my life when I rode my tricycle into the pool at a party and he dove in and brought me up from the bottom, still peddling. I was in school with their son, Eric who they lost in 2004. Tony lost his son, Nicholas in 1994.

She continued, “Families tied together in life and success and loss and struggle, past and present. Kirk is an example for us ALL. COURAGE. INTEGRITY. GENEROSITY. Their foundation link is on my website. See the work that they did for others. The playgrounds they built. Join them and me and honoring his legacy.”

It sounds like Jamie Lee and Kirk’s family were very close in the late ’50s and ’60s. Jamie Lee’s father died nine years ago. She honored him in a post back in September on the anniversary of his death. She wrote, “Gone but never forgotten. This day. ‘The cat’s in the bag and the bag’s in the river.'”

In addition, she shared a nostalgic family photo where her parents are wearing ‘ugly Christmas sweaters.’ She captioned the post, “Forget #chrisevansinasweater @knivesout The sweater force was strong with Janet and Tony. Their Star Wars were in full force at this point. An old timey version of an insta post. Even movie stars are not immune to awkward holiday pictures. Obviously, I’m not having any of it. Love and misses to many this holiday season.”