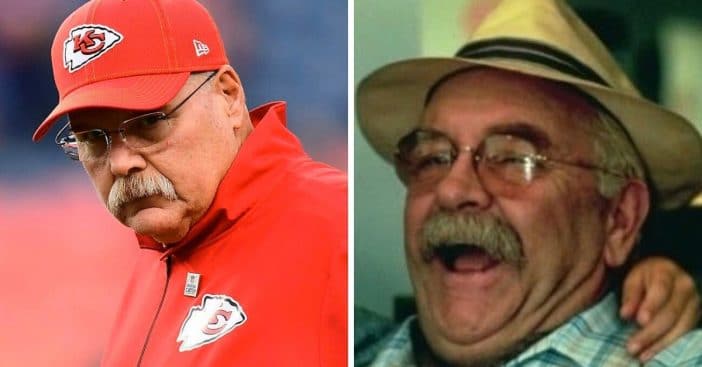 Actor Wilford Brimley, best known for his roles in The China Syndrome, The Thing, The Natural, and Quaker Oats commercials, had a little fun during the Super Bowl. While watching, he realized that he has an uncanny resemblance to Kansas City Chiefs coach Andy Reid.

Wilford tweeted a photo of the coach and joked, “Supposedly I’m coaching this evening.” They do look very much alike as they are both bald, have grey mustaches, and wear similar glasses. While Wilford was tweeting, he was very surprised that some of the younger generations knew who he was!

Wilford Brimley had some fun on Twitter during the Super Bowl

At the time of posting, his tweet has been retweeted over 4,000 times. One young person named Ellie tweeted, “Serious question is the chiefs coach the ‘diabeetus’ guy?” Wilford also used to appear in Liberty Mutual commercials, and pronounced diabetes like ‘diabeetus.’

Wilford’s last acting credit was in 2017, but according to IMDb, he does have something in pre-production. It would be nice to see this nostalgic actor on television or the big screen again!

Click for next Article
Previous article: Shannen Doherty Reveals That She Has Stage Four Breast Cancer
Next Post: ‘Dog’s Most Wanted’ Canceled As Family Feud Heats Up Regarding Moon Angell