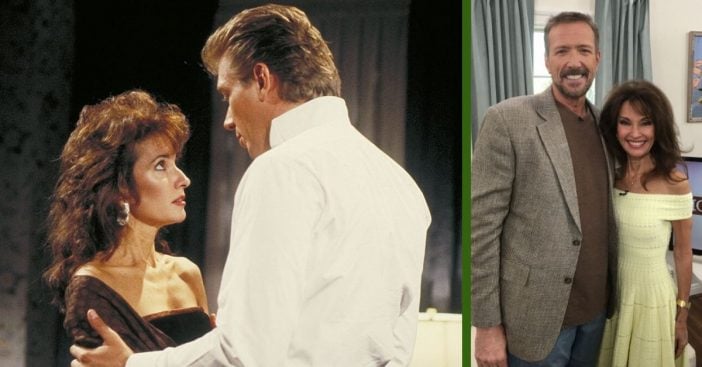 Rumors of a reboot began surfacing last winter when ABC Entertainment President Karey Burke made comments that began spreading. The comments were about bringing back canceled shows. All My Children ran from January 5, 1970, until September 23, 2011, on ABC. We’re sure fans would love to see a comeback!

Hey Folks! Be sure to tune into "Dr. Oz" next Friday, January 31 as I surprise "my Susan" and we discuss the possibility of an All My Children "reboot." Wouldn't that be something?
Don't miss it!

While on Dr. Oz, Lucci and Dr. Oz talked about her near heart attack. She was stunned to learn that she had a 90% blockage in the main artery of her heart. Lucci discusses how she’s been doing since the scare and Dr. Oz does a live scan of her heart on the show. They also talk important heart health signs that shouldn’t be ignored.

RELATED: Susan Lucci Posts Throwback Photo Of First Day On Set Of ‘All My Children’

Since the cancellation of All My Children, Lucci has gone on to appear in Lifetime’s Devious Maids, TVLand’s Hot in Cleveland, and Lifetime’s Army Wives. Willey has gone on to appear in YouTube’s soap opera Tainted Dreams. Dr. Mehmet Oz has been hosting his own show since 2009. On the show, they talk about all aspects of health and often have celebrities come on to talk about their own health scares/experiences.

So, are they into the idea of a reboot?

As for the reboot, Lucci admits she would be totally down for a revival. “I certainly hear those rumblings, too, on my Instagram account. Our fabulous passionate fans are still with us, Walt. They want to see All My Children rebooted,” Lucci says.

Dr. Oz also encouraged the reboot, saying that “everyone” really wanted it, so why not make it happen? In response to the reboot question, Willey says, “Well, hope springs eternal and then so it should. Every once in a while, there’s rumblings and rumors. So, sure, of course there’s always a chance.” Maybe we could be seeing a revival in the works at some point in the near future!

Click for next Article
Previous article: An ‘NCIS’ Star Is Coming To ‘NCIS: LA’ As A Different Character
Next Post: The Strange History Behind The Birth Of Candy Hearts