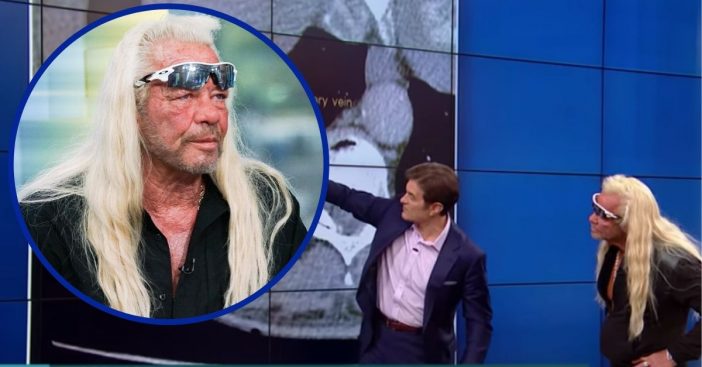 A few weeks ago, we reported that Dog the Bounty Hunter had suffered a pulmonary embolism that put him in the hospital for treatment. Dr. Oz was the first to inform us about Dog’s health, now he has medical scans of his lungs that show us the shocking truth about his health. Oz says in the episode that his findings “really alarmed me and I was fearful of this.”

He goes on to explain what the medical scans mean. He explains what the pulmonary embolism means for his lungs and what role it can play in blocking oxygen from getting to the lungs. This could mean a huge problem for Dog’s future health.

“You see how this normal artery here has little white middle part? But this one has a little piece missing out of it. You notice it’s white on the outside but the middle is like an eclipse, real black,” Oz says, pointing to various points of the medical scan. “That’s a piece of blood clot, that is actually inside the arteries of your lungs. That’s called a pulmonary embolism.”

He continues, “The problem with these clots is when they block off the arteries, they don’t let any oxygen get to the lungs. There are plenty of folks who died from these emboli.”

How to treat pulmonary embolism

Dr. Oz asks Dog what was going through his mind when he found out the results. “The first thing I said was, ‘How do we get rid of this,’ ” Dog responds. Of course, there is a multitude of ways to treat pulmonary embolism, from blood thinners to clot dissolvers. Sometimes surgery is necessary to remove the clot. Common symptoms of a pulmonary embolism include shortness of breath and chest pain, which is why Dog was actually experiencing prior to his hospitalization.

His new health realization comes just a few months after he lost his wife, Beth Chapman, to a long battle with cancer. “I thought I had a heart attack,” Dog says. “I’m like, ‘Beth, please quit squeezing my heart, please.’ I thought it was it.”

Losing Beth was it for him

Dog says that even when he didn’t want to treat his health issues, it was Dr. Oz who truly implored him to. “Dr. Oz came to me and said, ‘What are you doing? You’re crazy. Come back.’ So I did,” he says. “You got to do what Dr. Oz says.”

Oz also tells PEOPLE that he was fearful of Dog because of the grieving process he was going through at the time. He acknowledges that this process was affecting Dog’s strength at the time. “Beth had been his north star. She was the one that would go with him and keep him balanced so he could deal with these things. Losing her took away his biggest support.”