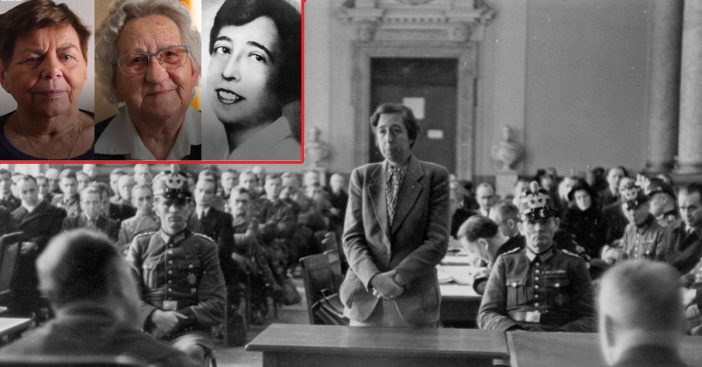 Wars are not just fought on sprawling, bloodied fields. The biggest battles can actually happen right in our backyards. Three Berlin women fought the Nazi regime with their own acts of resistance. At the end of the day, the risks stayed the same: getting caught meant death. Still, Ruth Winkelmann, Elisabeth Charlotte Gloeden, and Felicitas Narloch defied tyranny and fear so others could feel safe.

Women in uniform performed vital tasks as part of the Allies in the fight against the Axis Powers. Veterans today tell stories of providing important support at home. On the battlefield, pilots harassed Axis troops and foiled plans. But right in Berlin, these three women fought in a different way. Their weapon was hope, and to offer hope to Hitler’s enemies meant certain death. But their actions made all the difference in the world.

As part of his Final Solution, Adolf Hitler signed off on the extermination of all Jewish people in Europe. The SS rounded up and murdered millions simply because of their faith and ethnic background. Ruth Winkelmann and her family became targets in this genocidal campaign. The Holocaust brought Winkelmann a lifetime of grief in a short amount of time. She saw 16 of her family members taken away to concentration camps. There, prisoners worked or they perished.

RELATED: Former Auschwitz Prisoners And Lovers Reunite, He Finally Gets To Ask An Important Question

But Ruth Winkelmann lived on, in spite of the careful, meticulous actions of the Nazis. A garden shed became her home for two years, and there she hid from the SS. She also had to conceal her Jewish heritage, keeping her identity a secret everywhere but in her heart. All the while, she lived with traumatic memories. Kristallnacht, in particular, haunted her for ages. The night of broken glass saw a wave of violent acts committed against Jews. “In retrospect, I became a grown-up on that day,” she recalled. “The pogrom night took away my childhood.”

At first, not much was known about the camps the Nazis sent Jewish prisoners to. The Allies gradually gathered intelligence, and escapees carried horror stories back to their homelands – or to anyone who would safely listen. In addition, the harsh crackdown on people deemed undesirable left little doubt in people’s minds: no matter the propaganda, these places meant danger. Elisabeth Charlotte Gloeden, known also as Liselotte or “Lilo,” helped make sure her countrymen never had to find out firsthand what those camps really held.

She and her husband Erich hid Jews in their home, right in Berlin, under the very noses of Hitler and the SS. Offering an oasis of safety in a hotbed of hate-fueled extermination was not enough for Gloeden, however. As long as her Jewish countrymen remained in Germany, their fates could change on a dime. And so she helped arrange safe passage out of the country. Those they took in also perpetuated acts of resistance, as one individual was resistance leader Dr. Carl Goerdeler. The two continued their acts of defiance until 1944. Unfortunately, they were betrayed to the Gestapo. After providing hope for so many German Jews, Elisabeth Charlotte Gloeden was executed to invoke fear in anyone else who might resist. She herself endured torture while being interrogated for the treasonous act of providing aid.

But fear did not discourage Felicitas Narloch

These acts of bravery do not mean everyone never felt afraid. Perhaps a deep understanding of real fear was actually crucial in inspiring these brave women to act. They knew too well what others must have felt, and so resisted against the people inspiring such terror on Europe. Unfortunately, a lot of people had to endure this fear at all ages, even the young. Felicitas Narloch was one such person, but her actions remind us that bravery is not an absence of fear, but rather is a response to that fear.

Narloch was only a teenager when a Jewish woman, destined for a concentration camp, crossed her path. The woman arrived at her doorstep and asked for help, knowing what awaited her if the wrong people caught her. It was a risk but fortunately, Felicitas Narloch preserved the kindness in her heart even during such dark times. She took the woman in and hid her, providing life-saving shelter. Her reason was simple: “anyone would do the same.”