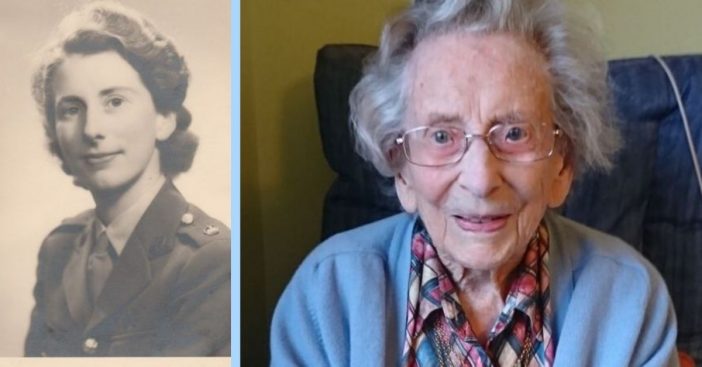 On Monday, January 20, Anne Robson passed away at a care home near Edinburgh. Robson served in the Auxiliary Territorial Service (ATS) during World War II. ATS served as the women’s branch of the British army at that time. At age 108, she was reportedly the oldest surviving female WWII veteran in the UK

She also came to be the oldest surviving member of ATS as a whole and oldest member of the Women’s Royal Army Corps (WRAC) Association. Around the UK and the world, people are honoring this woman’s bravery and dedication.

Robson was born Gladys Anne Logan Robson on September 14, 1911 in Duns in the Scottish Borders. Her birth year alone sets the stage for a very eventful life. Around her, empires changed power, mankind ventured into space, and all the world clashed in the deadliest conflict of the era. Before WWII commenced in earnest for Britain, Robson learned how to be a physiotherapist in 1933. That same year, she officially became a teacher.

Her teaching career moved to the back burner during her time served in the army. When she left, however, she resumed her old occupation, now with even more knowledge and experience under her belt. She was hired on as a senior lecturer at the Avery Hill College of Education in London before marrying primary school headmaster, Jack Robson, in 1953. Jack passed away in 1972, but he got to witness Robson become deputy head at the Longhenton Secondary Modern School.

Anne Robson was around thirty years old when she volunteered to join ATS. There, she served as a physical training instructor. In this position, she utilized her background with physiotherapy and teaching. Additionally, she took a practical approach to keeping soldiers fit and rallying them into action. Soon, her exceptional expertise advanced her to the rank of Senior Commander (Major) as Assistant Inspector ATS Physical Training. She witnessed a turbulent time in her country’s history, when uncertainty hung among the clouds and loomed with every suspicious noise.

Fortunately, she also did get to experience VE Day, recognized as the day the Axis threat in Europe came to a close. Forces Network reports that on that day, she “had a naughty twinkle in her eye” when remembering the revelry that followed victory. Robson looks back on the momentous occasion fondly. For two years after that day in May, she continued to serve in the British army. Her mischievous side is something those who knew her remember her by. She bore a “naughty sense of humor,” though she also ultimately came to be known as a very “gentle woman.” Everyone knew they could count on this “fiercely independent” veteran who insisted on driving herself even at age 90. We thank her for her determination.