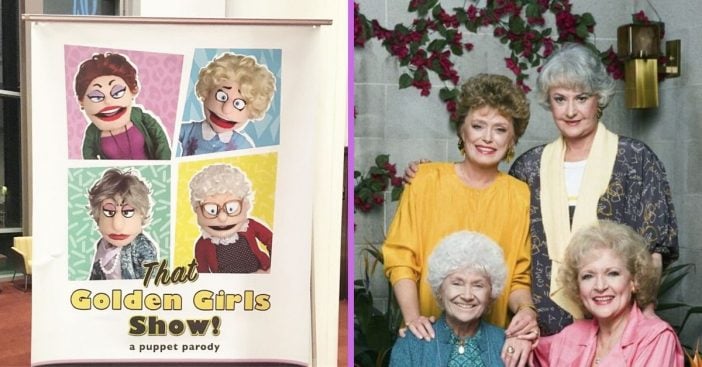 Puppet shows aren’t always for kids. The Golden Girls are going on tour in the United States but in puppet form! The show is called That Golden Girls Show! A Puppet Parody. As the title suggests, it is a parody of the original Golden Girls sitcom and is said to be a bit more risque.

For instance, the show’s description states, “Set in that sassy Miami house in 1985, That Golden Girls Show! is a brand-new show that parodies classic Golden Girls moments – with puppets! Get set for an evening of cheesecake, laughter, jazzercise, shoulder pads, sex, and the elegant art of the quick-witted put-down.”

Gather your friends for a ‘Golden Girls’ puppet show

The description continues, “The show has it all, from Sophia’s get-rich-quick schemes to Rose’s tales from St Olaf, from Blanche’s insatiable hunt for men and the Fountain of Youth to Dorothy’s daily struggle make sense of her life — all while keeping her roommates in check and fending off a certain pesky ex-husband once and for all.”

In addition, the show is reportedly 90 minutes with no intermission. The show originally debuted in 2016 off-Broadway. Now it is touring in New York, Wisconsin, Texas, Michigan, Indiana, New Hampshire and more. Click here for more information and to purchase tickets. This looks like so much fun!

In conclusion, watch a preview video where the Golden Girl puppets recreate the iconic intro:

Click for next Article
Previous article: WWII Veteran Anne Robson Dies At 108
Next Post: Frank Sinatra’s Gold-Seated Toilets Are Now Up For Auction