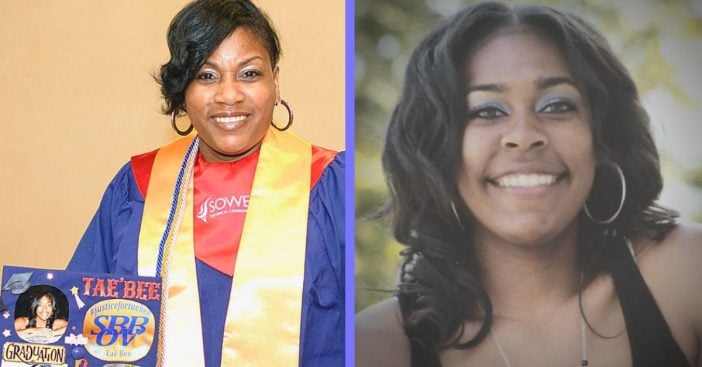 Theresa Tillman, a graduate of Sowela Technical Community College, has been haunted her for three years now by the death of her daughter. On Monday, Tillman earned a degree in criminal justice to find closure for herself and justice for her murdered daughter.

On April 10, 2016, Tillman’s daughter, LaShuntae Benton, tragically lost her life. She got caught in the crossfire between two shooters at a social event in Baton Rouge. Ultimately, no one was charged for this heartbreaking death. This parent, however, wants to change that.

Theresa Tillman lives with the heartache every day

Everyone heals differently. The scar does not always fade, however. Instead, the pain imposes itself on the soul each day. Tillman experiences unparalleled grief and loss each day knowing her daughter died so horribly. “This is a daily struggle,” Tillman admitted. “Every day, I struggle from the loss of my child.”

LaShuntae Benton died when she was only 19. Her mother recalls her being on a glorious path to success before her life ended. “As a parent, you never give up on your children and you strive to get your kids in college,” Tillman stated. “You hoping that they succeed and get a degree, and my daughter was on that path to do that and her life was cut short violently for no reason.” Part of this injustice is what haunts her the most. “It’s painful to be here three years later, my heart still can’t fathom the thought of losing my child.”

Though she is gone, LaShuntae Benton inspires her mother each day. Tillman pushes on out of indignation, a need for justice, and unending love for her daughter. Pictures of LaShuntae covered Tillman’s graduation cap, reminding everyone why she pursued this degree in the first place. “If I have to solve her case, I will,” Tillman vowed. “There’s no way you can have two suspects and not hold them accountable, that’s just injustice.”

Tillman herself is inspiring the rest of her family, as is LaShuntae. “She’s a great example and a perfect role model,” Tillman’s elder son, Terence Thompson, said of his mother. He smiled at the recent graduate as he added, “You can do anything you put your mind to no matter what life throws at you. Got me wanting to go to college.” Tillman is not done yet. After this, she hopes to earn a bachelor’s degree in criminal justice from McNeese State University. “I’m gonna work for law enforcement somewhere, but even if I have to do my child’s case on my own, I’m going to do that and that’s what I’m seeking to do.”

Click for next Article
Previous article: Superheroes Spend $20,000 Emptying Toy Aisles To Give Hospitalized Children A Merry Christmas
Next Post: Just In: Herman Boone, Portrayed In ‘Remember The Titans,’ Dies At 84